Being the newest class in WoW and one of the most exciting to play, not just there you can enjoy in Heroes of the Storm too. Titled as a Melee assassin, of course, what else could he be? Having the power of the dashes and dives makes him a really mobile character. Illidan can avoid deaths really easy. Having strong and powerful abilities with low cooldowns makes Illidan a real beast. Let’s see what would be the best combination of talents within this Illidan Build Guide.

Being betrayed makes you be even stronger, the feel of being hated transformed into a true power that wrecks enemies. Illidan can deal insane amount of damage but however, you should be careful and provide the best execution. He is not that tanky like Thrall, so anything can turn upside down while you’re fighting. That explains why we have picked these talents. Let’s see them below. 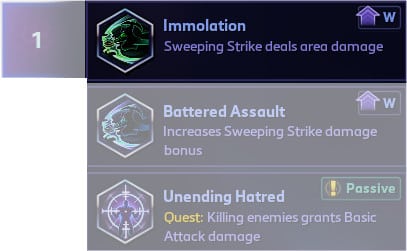 Everyone goes for Unending Hatred, but are you going to be able to get the full quest? Also, Immolation is really close to it by dealing area damage to more enemies if any around. Having the low cooldowns you should be able to spam the Immolation effect, more precisely burning enemies for 22 damage which lasts for 4 seconds. That is 88 damage. Sweeping Strike has 8s cooldown which makes it really spammy. This can also bring you early kills leading towards XP. 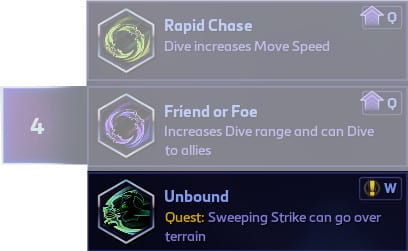 Getting away from enemies was hard? By getting Unbound you can go over terrain, walls, blocks, so you can easily escape death. The best fact about this talent is that after hitting 30 enemies with Sweeping Strike, you will get additional charge which is off cooldown and you can use it twice. Escaping is a lot easier now, right? It also goes good with the first talent which is going to make burn enemies for longer.

This Illidan build is all about damage and surviving. Because of that, we must get the Unbound talent. Yes, Friend or Foe might be good and will allow you to dive to allies, but do not think that Allies will always be there for you. 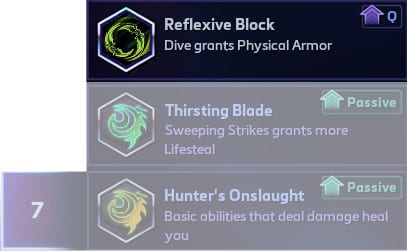 Talent level 7 gives you additional Physical armor per dive. Keep in mind that is physical armor and not magical. Do not worry around that, this comes good with another talent that’s about to come. Dive will grant you 75 extra Physical Armor which is going to help you a lot in surviving. It lasts for 3 seconds and it’s over when you’re hit twice. It will reduce the damage of those 2 attacks for 75%. This comes good against physical damage dealers. As we said, it also comes good with other talent. Illidan needs it, you will need it too. Believe me you’re not going to be that squishy anymore.

I can see a lot of players going for Metamorphosis and sometimes it might be good. But knowing the fact that you’re Illidan and you can be anywhere on the map, farming mercenaries or doing anything else, The Hunt seems like more needed. Speaking about farming mercenaries, that’s really easy with Illidan. Having the Evasion spell ready together with the lifesteal, that’s all you’re actually going to do. Farming mercenaries and keep the lanes pushed as much as you can. That’s why we’re choosing the Hunt over Metamorphosis. Illidan will be allowed to get the easy kills with this.

The Hunt will make you charge from a long range to an enemy hero and deal 251 damage and also stun him for 1 second. You’ll just love it. The power of Illidan will be so fun for you and the use of this ultimate will be just fun. 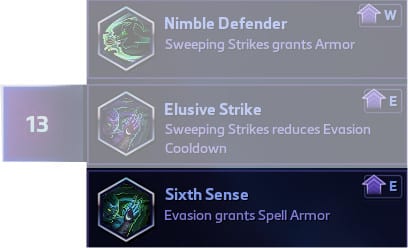 Gotta get the Sixth Sense up and running because you’re blind and cannot see, just kidding. This is the talent we told you above that comes good with Reflexive Block. Hitting Evasion will give you 75% SPELL ARMOR and works just like Reflexive Block, except that is magic armor. You will be able to avoid 75% of the magic damage, at least the next 2 incoming spells. This will make you really tanky and offer you the chance to get away sometimes or tank through the fight. It will also help you to kill bosses even single-handedly.

Getting Sixth Sense is a must for Illidan and Illidan players. Believe me, this build should bring you real fun. 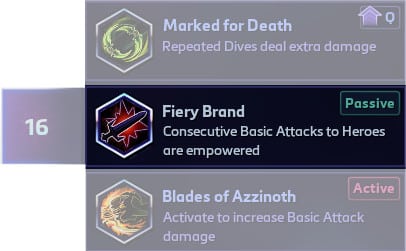 This was really confusing and we’ve been doubting ourselves what to get. Well, let’s see what you should do, despite the fact that we picked Fiery Brand in this build. If you’re playing against tanky heroes, this might be your winning talent. This makes you attack enemy heroes with additional 6% damage of hero’s HP. So, every 4th attack of yours will deal additional 6% damage from the enemy hero’s hp. Given the fact that Illidan has a decent attack speed, this might be your winning talent.

Otherwise, you might go for the Marked for Death too because Dive has a low cooldown. I would say, this is totally your choice, but we go for Fiery Brand. 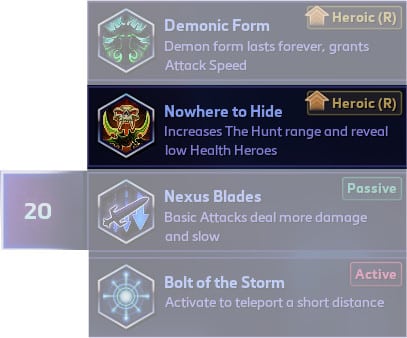 You might ask yourself why we go for Nowhere to Hide instead Nexus Blades. Well, there are enemy heroes that can save themselves on really low HP. However, this will deny them escaping. Illidan will reveal all the enemies that are below 25% of health which is going to make him able to charge them with The Hunt. This will also bring you a lot of easy kills. Illidan is all about killing enemies and leaving the enemy team fructured. This is a big of advantage and sometimes the right usage of The Hunt together with Nowhere to Hide might bring you a win.

Think twice of what you wanna get, Nexus Blades or Nowhere to Hide. We find Nowhere to Hide as a big boost to your team. Sometimes the revealing of the position of Enemy that’s under 25% of HP is really important. However, we are speaking about talent level 20 and that means that it’s really late in the game and anything can happen. Before using Illidan’s Heroic, think twice as you might also lose the game with just 1 mistake.

That’s all about this guide. I hope you like this build of ours. If there’s anything you’d like to add feel free to add it in the comments down below.

Hello, fellow readers! If you want to get in touch with us and participate in our discussion boards, make sure you visit our Forums. We are more than sure you will find something useful there! The forum is new, so be among the first ones to say Hello!
Tags
build guide heroes of the storm Illidan