Hearts of Iron IV gets a new patch 1.3.3. This update brings a lot of changes in the game. So keep on reading and find out more.

The changes go for the Industry, World Tension, and Capitulation. All changes are being made in order to give a better gaming experience. Well, the devs haven’t been focusing on AI lately, but at least the players got an update. First thing first, lets;s start with the Infrastructure effects.

The infrastructure now affects the value of building factories. What does that mean? The cost will stay the same, but there will be some cost reductions for readability. If the state is with lower development the factories will cost more. This change is beeing made to point out the states that are more valuable. Also, this change will slow down the growth of the industry. Now, the value of the infrastructure is going high.

There are some efficiency changes as well. In Hearts of Iron IV, the efficiency was with a linear growth. The initial production efficiency growth is changed, so now it will be faster, but also slows down as the line is more efficient. What is the point of all of this change? The high efficiency and efficiency retention is given a higher value and makes you reconsider whether to make a change on a production or not.

There are also new threat rules implemented in Hearts of Iron IV. The war justifications will now account for the size of the state you are claiming a war. Claiming a war against the bigger nation will now result in a higher world tension. If you are justifying against more countries, the political power will cost more. In addition, if any country is at war, the tension limit if you join a faction will be low.

Before, if a country surrendered, you would get an access to their stockpile of equipment. Now, you can only access to a limited amount of their equipment. So here is how it looks: 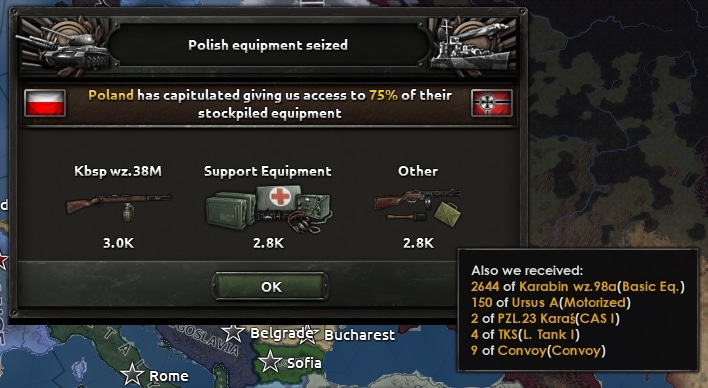 Dejan KacurovFebruary 8, 2017Last Updated: April 5, 2017
0 1 minute read
Facebook Twitter LinkedIn Pinterest Reddit Telegram
Facebook Twitter LinkedIn Pinterest Reddit Telegram
Hello, fellow readers! If you want to get in touch with us and participate in our discussion boards, make sure you visit our Forums. We are more than sure you will find something useful there! The forum is new, so be among the first ones to say Hello!
If you are a video game developer and you have a submission to make, you can mail us at team@futuregamereleases.com