Just as the title says, The Division Anniversary celebration will give away 200 premium credits to all Division active players for free. This is a really good opportunity for players to get back into the game, just as Ubisoft announces. They will also receive a premium celebration emote too.

They also point out that since the Update 1.4 things came out better in terms of players getting back to the game. Actually, they did not mention that, but we know that’s what actually happened. What do you need to actually do to get these free rewards?

All you need to do is be active from March 9 to March 16. As the Creative Director at massive Entertainment, Julian Gerighty stated that “It’s been a super exciting, wild ride”, they want to continue with the same tempo. 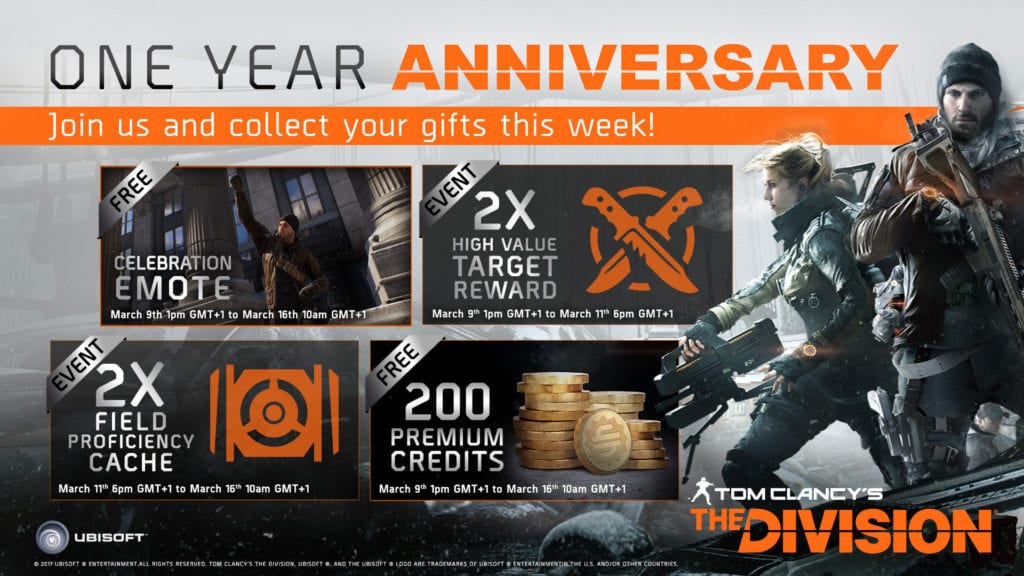 However, I do not see that’s happening because of the failure of every single new patch. [The Last Stand Patch that comes out with a glitch where players can actually use a healing station and an Overheal Vest so they can count points]. This is what actually makes all the Division players mad and they do not want to come back into the game. Despite this fact, I have chosen to come back into the game and give it one more try. Also, this kind of mistakes should be repaired within a strict timing. I mean, whenever this happens in another Multiplayer game, things fix instantly. That’s what Massive and Ubisoft are missing.

Ok, back to the Anniversary awards. Players will also receive a 2x multiplier on field proficiency caches and HVT too from March 9 to March 11.

This year there were released, Underground, Survival, Last Stand.

2 New Expansions Are About To Come

Despite the rewards, they are even planning on releasing a Year 2 content for free, which means that there will be new updates for all the players. They should not cost a penny as they said.

They are going to come in two separate expansions which are planned for release this year. Ubisoft and Massive are planning on adding feature modifiers, leaderboards and other unique items that are going to be available only throughout these activities. Does it mean that Ubisoft will expand the Division map? Time will tell…

The best thing is that the new content will come for free and let’s just be glad for that. Free DLC is about to come and we can’t wait to see what’ll be. We just hope everything will be alright and no exploiting and glitching possibilities will occur. Good luck.

For more info, check out their official blog.

Hello, fellow readers! If you want to get in touch with us and participate in our discussion boards, make sure you visit our Forums. We are more than sure you will find something useful there, as most of the news are coming in there first. The forum is new, so be among the first ones to say Hello!
Tags
Anniversary massive the division ubisoft