Before some time I’ve told a lot of people that I will release my Sentry’s Call Build Guide to the public. Thanks to our Urban MDR Exotic drop, this build came to live. We’ve also made a video covering the full build, so it will be a lot easier for you to understand it.

I’ve been thinking a lot about what kind of a setup to go for. Seems like running a Reckless and Specialized backup helps a lot. Reckless for a higher amount of DPS, Specialized for Skill Power. Enough talking, let’s start with our Sentry Build Guide. 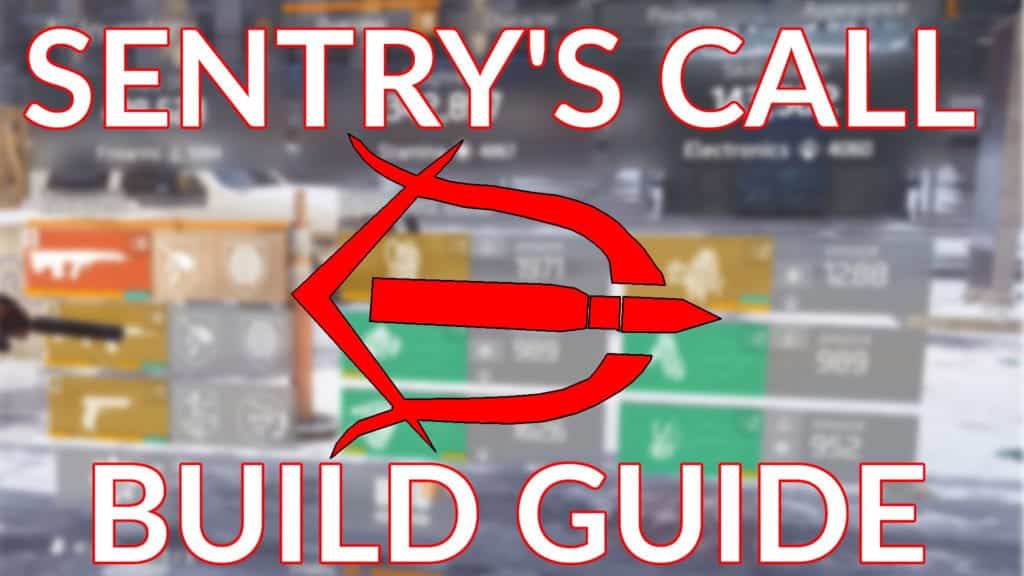 A lot of people think that the Urban MDR combined with a Sentry’s Call Gear Set is the best option because of the 3 Marks that stack as a Status Effect. Well, you’re wrong. Those 3 marks do not count as a status effect on the player. I was thinking the same, but I was just being a fool.

Running the Sentry’s Call gear Set in The Division 1.6 with an Urban MDR is awesome. You will see why down below.

Before we continue with the build, let me just say that this build is good for literally every environment. PVE, PVP, Underground missions, Heroic Incursions, Legendary Missions, literally everything. However, I find it bad in close fights, that’s why we have our Shotgun equipped and ready for a fight. The Status Effect buff is not working and you can see that in the video below.

Sentry’s call gives us the chance to deal 15% more damage to the guy that’s marked using a semi-automatic weapon. This buff applies to the whole group, not just the guy running the Sentry’s Call build. Let’s see our overall stats before we continue analyzing the items. 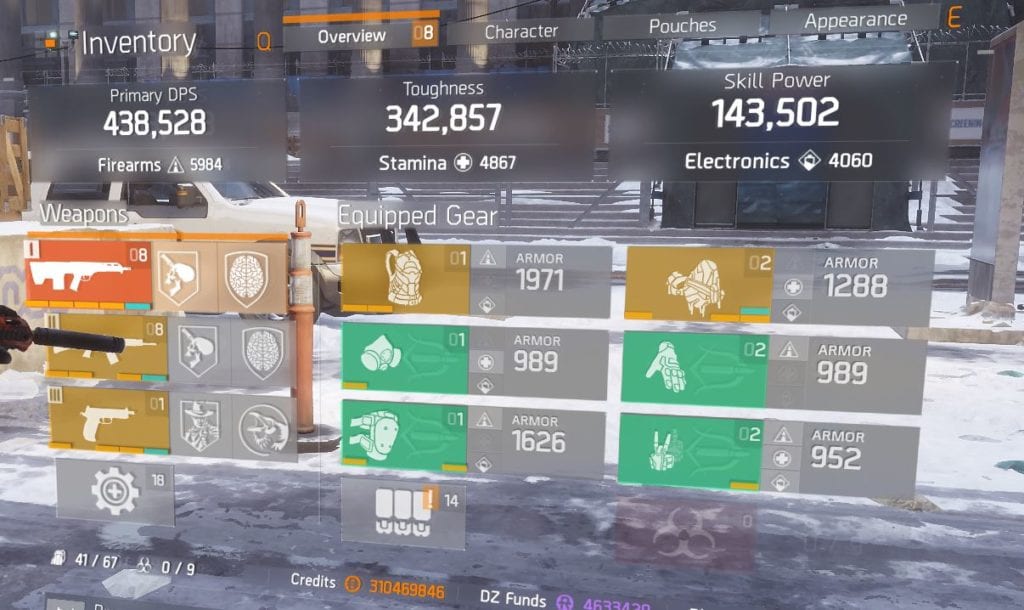 Reckless chest piece gives us damage boost of 8%, but, makes us receive 10% more damage. A lot of people think that this is bad but if you’re a damage dealer having a nice group of 4, this is really awesome. Talking about the stats, you must get the Skill Haste on it. Having the Skill Haste is greatly appreciated because it gives you a big amount of cooldown to your skills. Knowing the fact the we have an Urban MDR with a Competent Talent, that’s kind of a must for us. See the picture below. 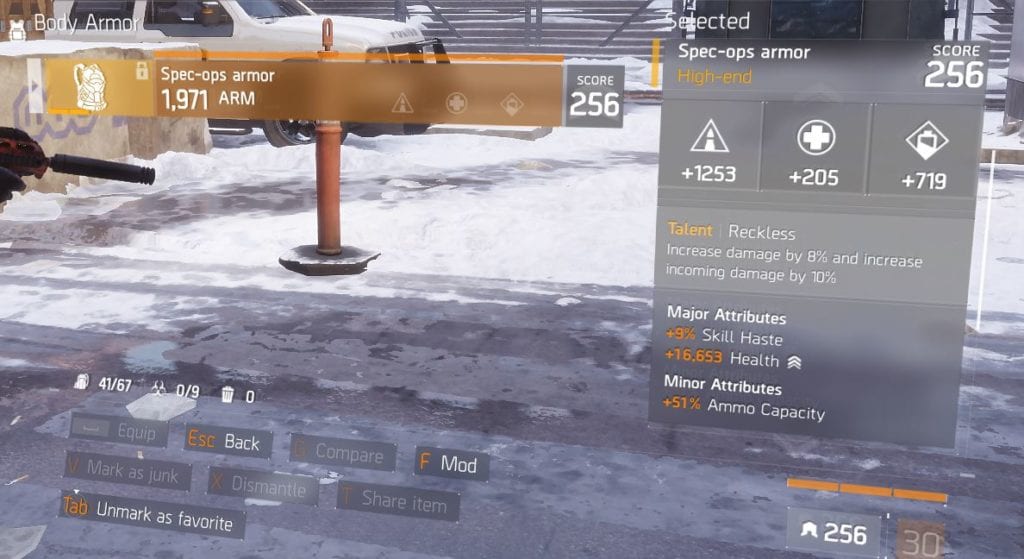 The Major Attributes should be Skill Haste and Health. If you do not want to get rid of your Exotic Damage Resilience because of those Seeker Mines out there, you should think twice. The better option will be to learn to destroy or avoid the seeker mines instead of having the Exotic Damage Resilience attribute. The Minor Attribute I prefer to have it is Ammo Capacity. It’s always good, no matter what you do. Let’s move towards our Specialized Backpack.

Ahh, there’s nothing wrong with a high Skill Power. Thanks to our Urban MDR which has Competent, I’ve found our that there’s nothing wrong with a Big amount of Electronics and Skill Power. This gives you a bigger Crit Chance to your pulse, better First Aid using your Booster Shot… I mean, everything is really really good. Let’s see our Specialized Backpack:

I mean, we would’ve be running a lot higher firearms if we’ve been without the Competent talent on our urban MDR. But, having a Specialized Backpack in any build is always good. Having a 1.2 stats and also Health as a Major Attribute is what’s needed. Everything else should be just ignored.

This is where our Sentry’s Call build starts. We decided to go with a mask, gloves, knee pads, holster. As you can see we got rid of the Nimble Holster, but sometimes that holster is useful. We might change it, only if needed. So, let’s see our Sentry’s Call Mask.

As you can see we are running the Crit Hit Chance, even though we could’ve got like 4% of that. I was not able to find one better and that’s why I am sticking to this one. It’s always nice to have a bit more CHC. There’s no need to rush for anything. Let’s move forward to our Sentry’s Call Gloves.

So there is a chance for a lot of people to change the Chest Armor into a Sentry armor and just get the savage gloves. However, I do not find that very good since I am losing 8% more damage. Whoever thinks that the Reckless chest armor is not worth, he’s just wrong. There are lots and lots of options out there. This one fits us the best. I mean, this build is really good when it comes to doing PVE and PVP, so you’re good. Let’s see our Sentry’s Call gloves below. 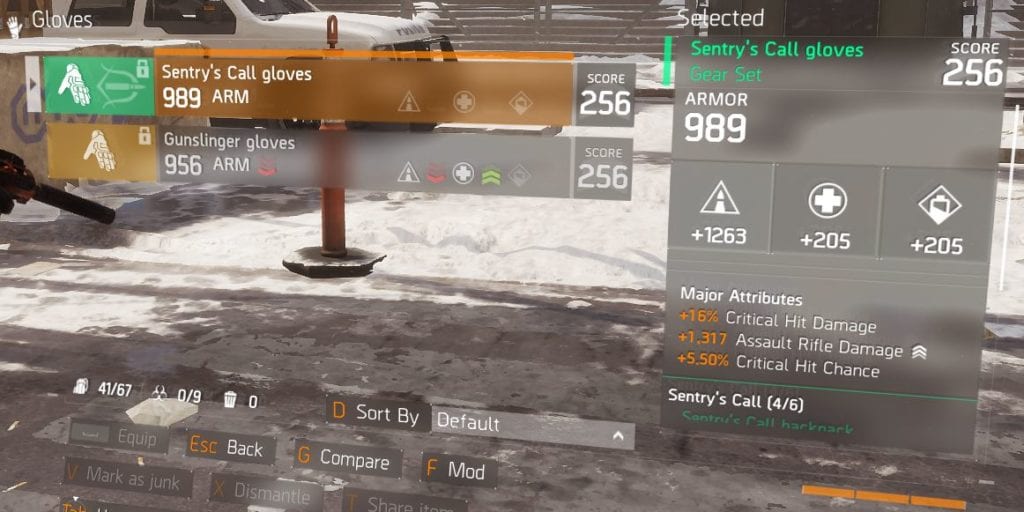 I am telling you, this build will be your favorite, just as for me. I love it from the bottom of my soul. The Division will become your favorite game, just because of one build using an Urban MDR. Alright, so the Knee Pads should be having a high amount of Firearms or Stamina, and also a high amount of Health, coming as a Major Attribute. Let’s see them below. 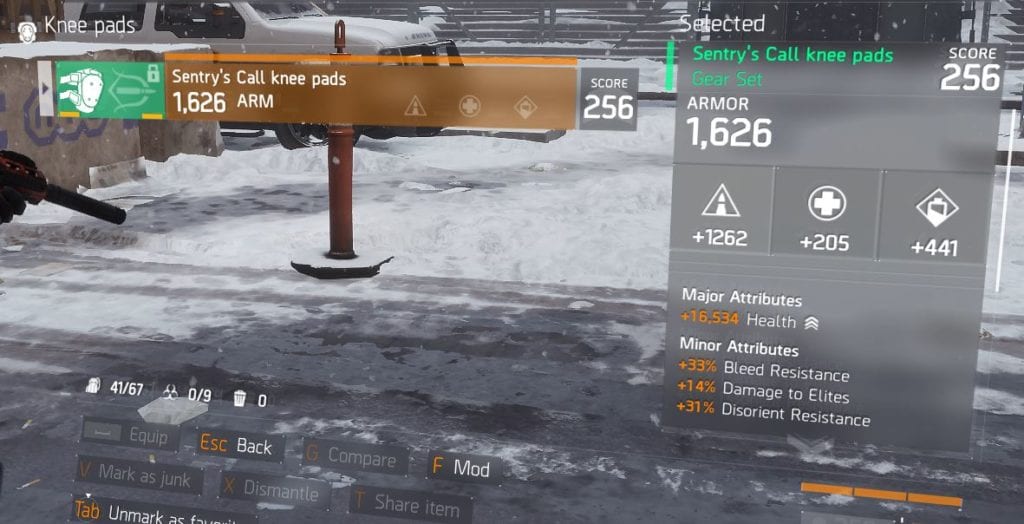 Do not forget about a high Armor. Armor is still needed in this game, even though it’s not that important. So, as soon as you have a good stats, armor and health, you’re good to go.

Just as everywhere except on the mask, the Sentry’s call holster should have the highest amount of Health and also make sure you get 1.2k of Firearms, 1.2k of Stamina and 1.2k of Electronics. One of the most valuable items in the game. Just make sure you’re getting all of the three stats up to 1.2k. 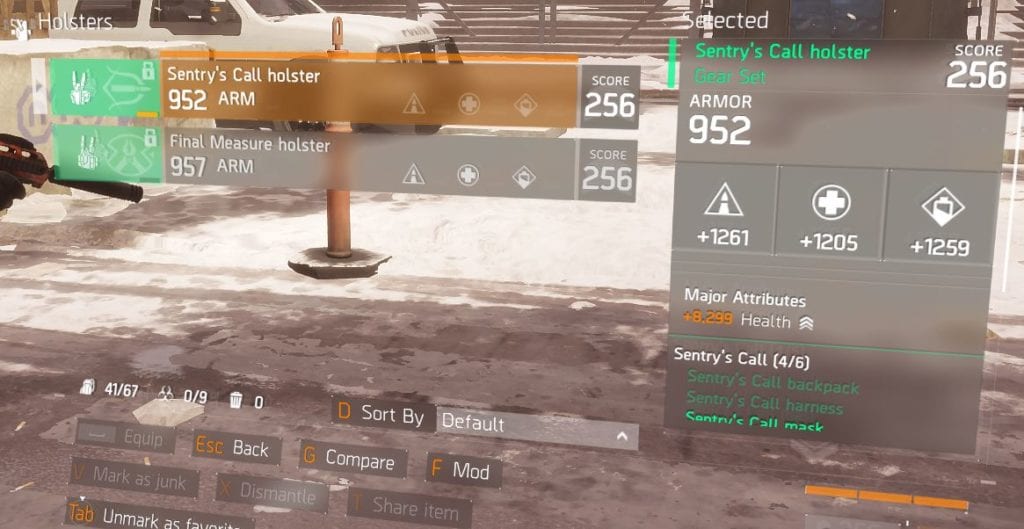 That’s pretty much it. Time to move towards our weapons.

So, what kind of stats would you need for a good Urban MDR. Well, I think that having Deadly, Competent and Distracted which comes as default, is pretty good. I’ve been using it for some time now and I can deal a really good amount of damage. 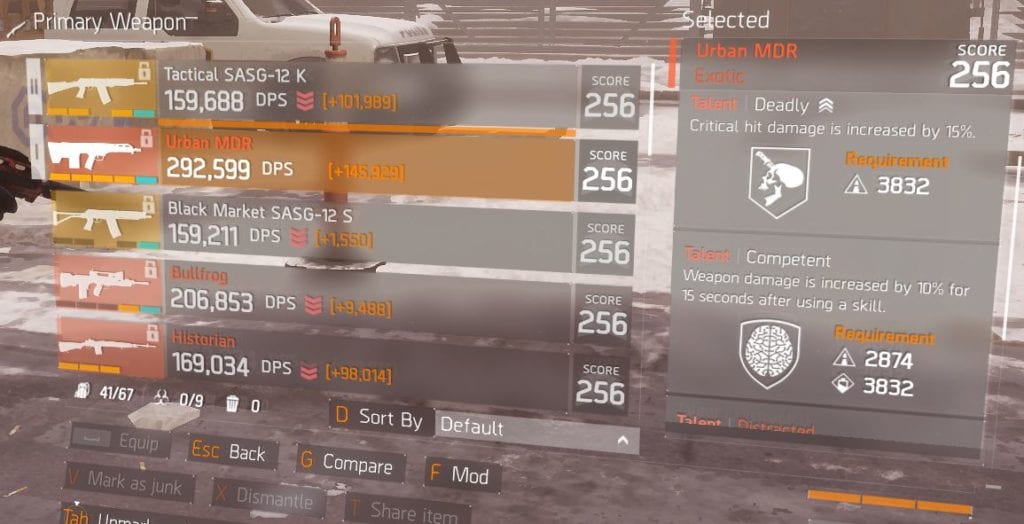 It’s good for both PVE and PVP environments, knowing the fact that you’re running a Sentry’s and can also help your teammates deal more damage. That’s why I love the Sentry build. It’s just so awesome it can help you and also your teammates. For more info about the mods we’re running on our primary weapon, check the video below.

Knowing the fact that running a Sentry build pushes you to run a semi-automatic weapon, the shotgun is a nice choice. I find it very good for close fights. Since the 1.5 update I’ve started loving it a lot. Because of that, we’re going to use a Tactical SAS-G 12 with Deadly, Competent and Brutal. See the pic below. 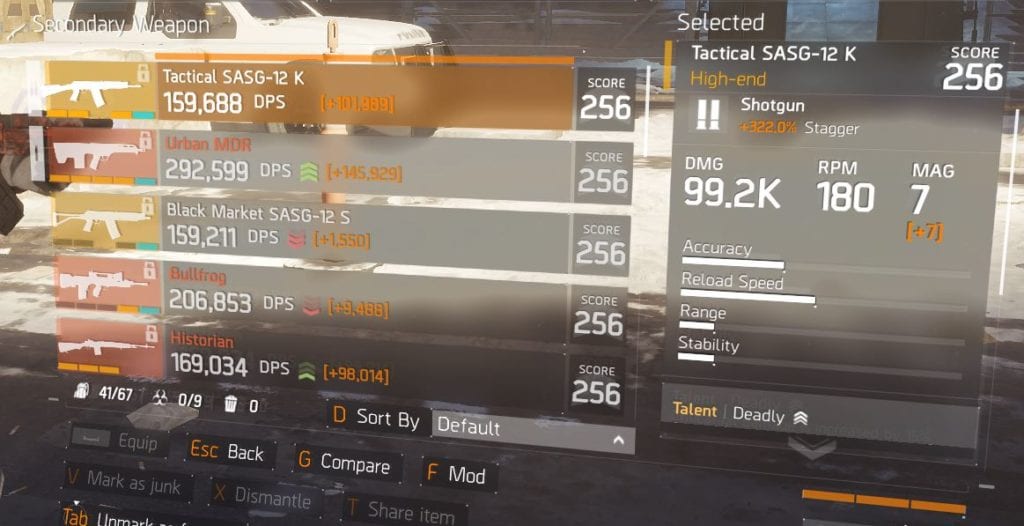 For additional Info about the weapon mods we’re running, you can check the video below.

It’s time for our last part and that’s the Prototype and Performance gear mods. We’re aiming the same as in our Striker’s Build. The Sentry’s Call Gear Set is all about the damage so that’s what you should aim for too.

We are not using any Firearms or Stamina Prototype mods. Because of our Competent Talent on the Urban MDR we are pushed to use an Electronics Gear mods with Health Attribute on them. 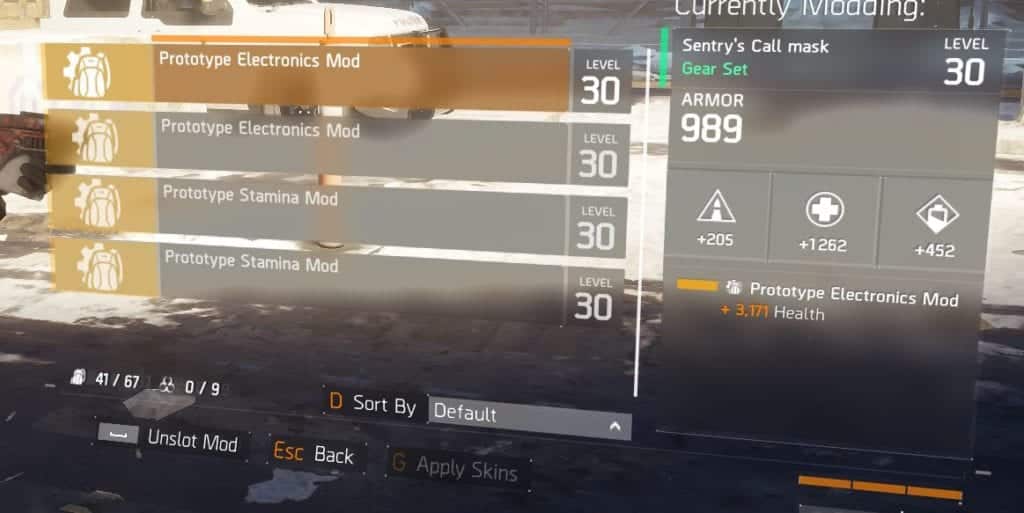 Regarding our performance gear mods, we also aim for the damage and having our Pulse as a skill, we are using the Pulse Critical Hit Damage mods.

Well, that’s it guys. If you think that the Sentry’s Call build using an Urban MDR is bad, go ahead and check out our Stolen Signal video where we run this build and finish the Incursion really fast. Tell us your thoughts in the comments. What is your experience on running the Sentry’s Call gear set? Good or bad? Till the next time, Agent out. 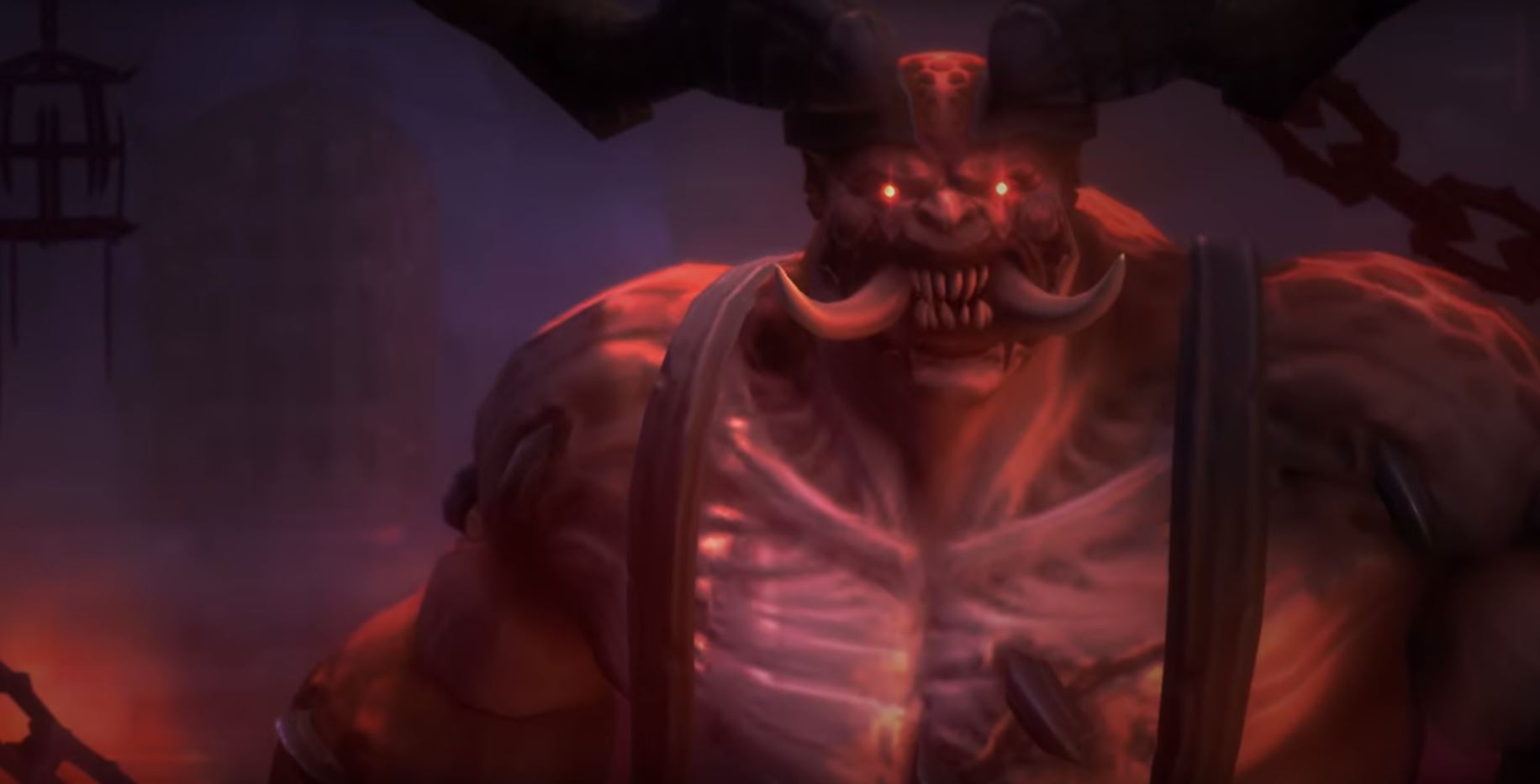