As you already know, we’ve been a bit idle for a couple of days so we’ve not been able to tell you anything new from the gaming world. There is 1 reason this happened. Messing up my sleeping schedule in order to find the best possible Gear Set to run while playing The Division’s Last Stand. Now, because of the Last Stand item normalization, it’s really easy to play the Last Stand. That’s why we’ve been playing the Last Stand so hard we even got level 40 the second day. Well, I think we finally found The Best Last Stand Gear Set.

I want to tell you that I am not going to speak anything about the Seeker mine builds and the Deadeye Gear Set using an SVD. What we’re going to speak about are the 3 Predator’s and 3 Banshee gear sets. I’ve also tried the Striker’s Gear Set too, but it feels like something’s missing. I will talk about which weapons, skills, talents you need to aim for too. Let me remind you one more time, I do not plan to speak about broken builds a lot of players use because I hate them a lot!

Alright, so, first of all, let me show my overall stats. 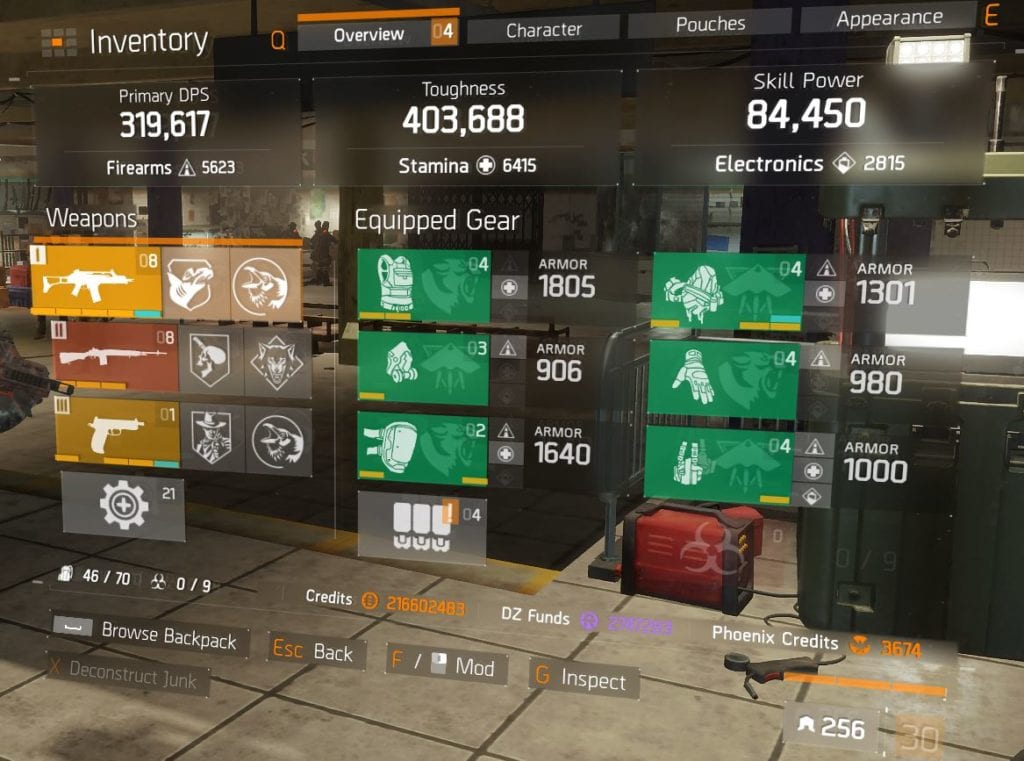 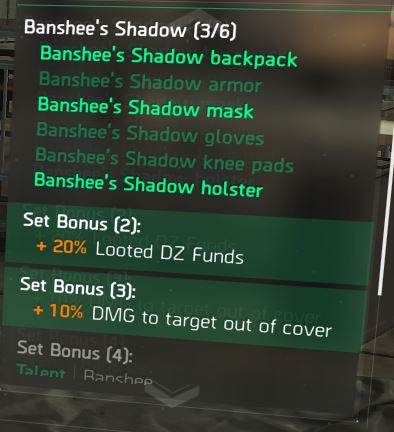 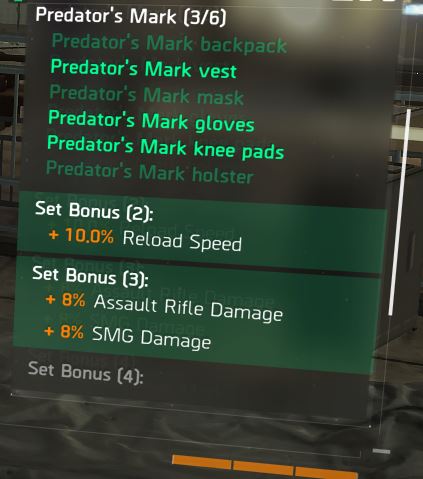 So, by using the Banshee’s Shadow and Predator’s Mark while running an Assault Rifle or an SMG, we are pretty much getting 18% extra damage, right? I mean, there are not even going to be anyone that takes cover in a Last Stand missions, so you will get those 18% for sure :). Believe me, a lot of players asked me what kind of Build I am running while playing the Last Stand. Well, now they’ll have their chance to know it.

Even though we’re missing the final talent on the sets, we’ll do just right. This is not a Dark Zone, so we are not going to need them at all. Now, let’s go Item by Item and see the stats completely. I mean, this set will be also useful in the Dark Zone, not just in the Last Stand.

Now, even though we’ve chosen this kind of set-up, it doesn’t mean you’ll need the same. Just work around by yourself. Which item has the bigger value should go to Vest or Gloves or Kneepads. This is totally your choice. 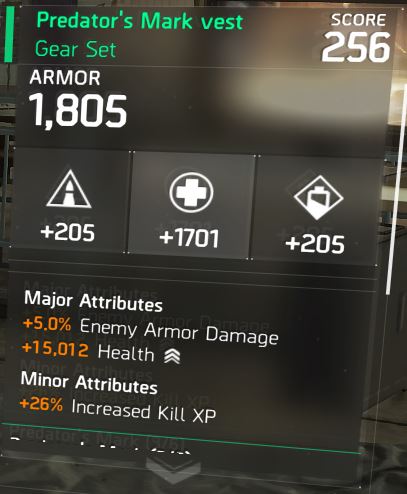 This is a Stamina Vest and we have EAD. However, Exotic Damage Resilience might be better. The Second stat is Health. I mean, Health is a must after the 1.6 patch. That’s it. Let’s move towards the gloves.

This is the gloves you want to use, it doesn’t matter if they’re going to be Banshee or Predator’s, just make sure you have a god roll stats on them. AR or SMG damage + the CHD and CHC. 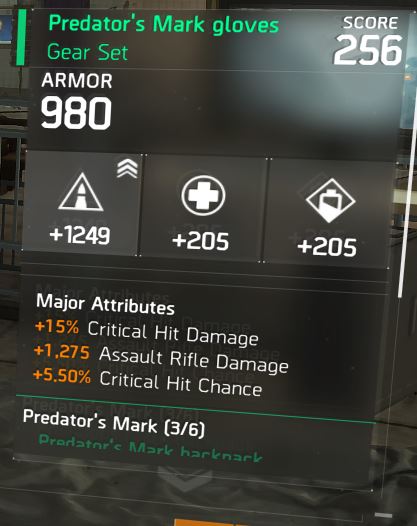 It was really hard for me to leave the Savage gloves as I’ve been used to play with them since the game came out. However, it is what it is, time to move forward.

Even though I’ve chosen to go for the Health to get the Survivability a bit more. I’ve been rerolling this stat right now, it was 15k before. I might wanna try to Crit Hit Damage too. If it comes out better, I will update the guide ASAP. 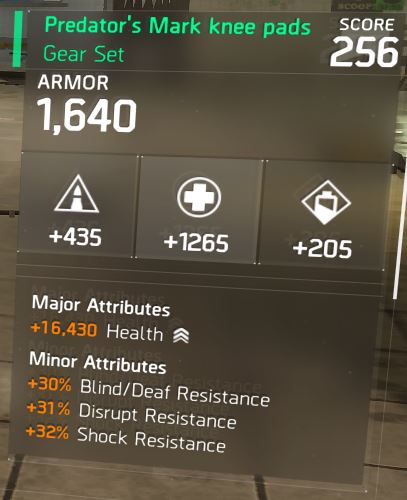 Now, it’s time for the Banshee’s Shadow. Let’s see what we have.

Over here, we aim for the CHC so we can get a bit more damage output. I think that’s enough. The Minot stat does not need to be explained. Just make sure your items have 1200+ primary stat and you’ll be just fine. 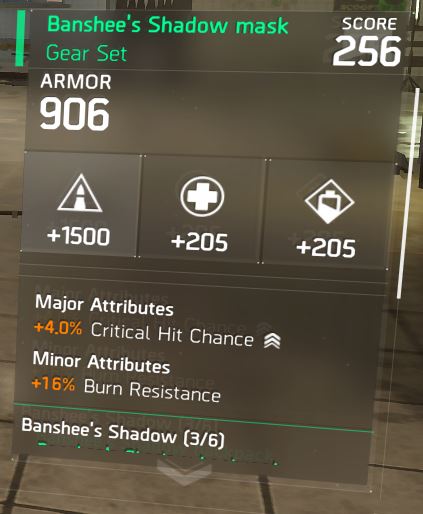 Let’s move towards our next Banshee’s shadow gear.

As every other item… Health. Health is a must after the 1.6, I’ll repeat that too. We do not need anything else to explain. Let’s move forward. 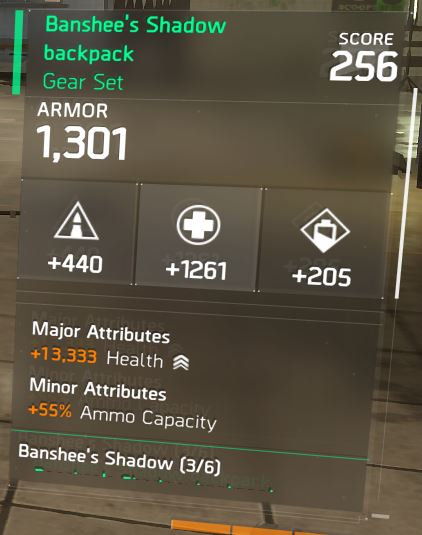 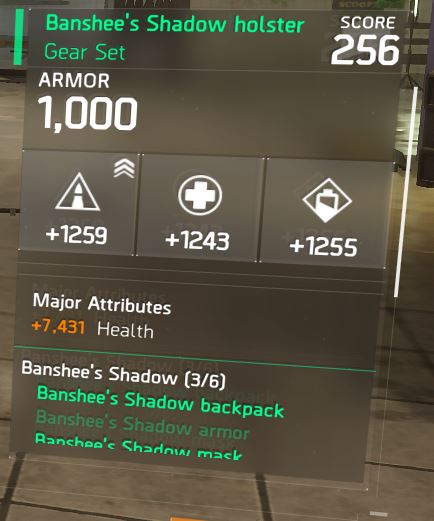 Alright, we’re done with the gear, now let’s move towards the weapons, yey. This is probably your favorite.

Ok, you are probably asking yourselves what kind of performance mod we got equipped on our gear. Since we are running pulse our performance mod choice is Pulse Crit Hit Damage on every single Gear Set.

Every other Prototype mod is Stamina – Health or Firearms – Health.

Last Stand Weapons To Use

Alright guys, since we think this is the best damage dealing Gear Set. I would love to ask you something. If you think there something better, just let us know, and we’ll try it right away. Ok now, let’s see our weapon choices and talents. I really want to discuss about this with more people. A lot of people think that the Competent talent on a weapon works good, I don’t think it’s any good because I’ve tried it and it doesn’t satisfy my needs at all. Because of that, I decided to go for something else.

As you remember in our Striker’s Build and AlphaBridge Build we’ve also discussed about the weapon’s Recoil. So, because of that I wan’t to tell you that the best AR weapon you can get is the Lightweight M4. It has the best recoil, even better one that the LVOA-C. So all of you that run LVOA-C, if you can control it, go ahead. LVOA-C and Lightweight M4 are my favorite. However, I’ve found something else and I said ok, let’s give it a try.

This is the weapon we’re talking about. The G36 C weapon has the most stable Recoil than any other weapon. Believe me. I find that all of you that use Striker’s Gear Set build, you should get this weapon. It doesn’t have any kind of recoil and you’ll only Pew Pew at people. Just push your mouse button and follow the target. Even though it has 100 less RPM than Lightweight M4 and LVOA-C, it doesn’t feel like it. 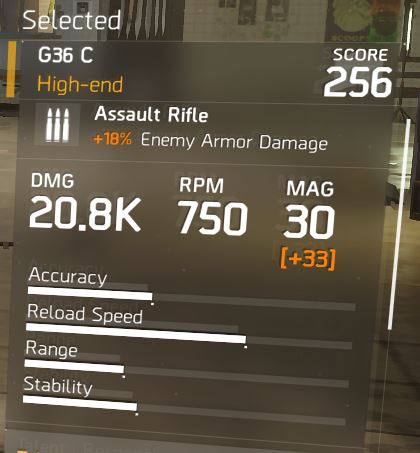 The talents on this weapon are those that you actually need to have on all weapons. They are: Responsive, Unforgiving, Deadly. Do not even bother to go for anything else. These ones are by far the best talents if you ask me.

Below you can find the best weapons to use by Running this Gear Set, even though right now we’re using the G36 C.

Believe me guys, I’ve been trying so many builds these days, thanks to the normalization I must say. However, this one works the best for me. The second best was the Striker’s Build. With a Specialized backpack. Ok, now let’s see the needed talents and skills for this build. I’ve also tried the Nimble holster using the two cover-to-cover talents. That would be the third option. all of these three builds work good.

Below you can see the skills we’re using. We use the pulse that goes well with our CHD mods. This is awesome. Just make sure you use the Booster Shot while you’re fighting with a guy and you are zoomed in. This will give you a bit damage resistance and also damage. It works good with the Unforgiving weapon talent and + the gear damage bonuses. Just make sure the guy is out of cover. 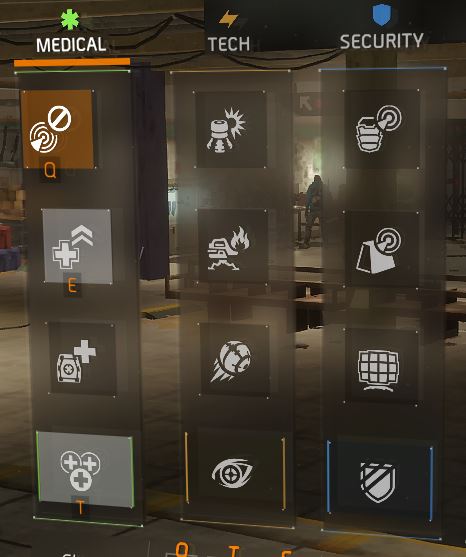 Now, let’s see the talents we use. 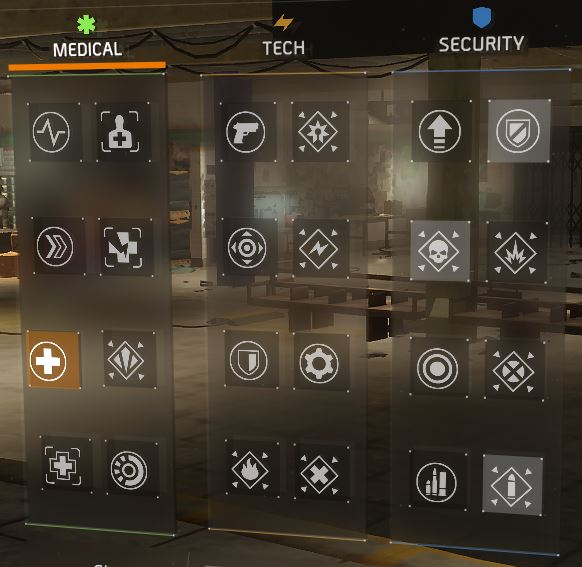 Just to tell you, whatever you do in this game. Believe me, it’s not just about the build. It’s all about the aim. If you aim good, you’ll do just fine. I also aim for the Head and that’s why i got the One is None talent. I hope this build will win you a lot of games just like me.

Stay tough, and enjoy the best Last Stand build. Till the next time, agent ANGE1K out.

[interaction id=”58ec8012cb4fa6890817915a”]
Hello, fellow readers! If you want to get in touch with us and participate in our discussion boards, make sure you visit our Forums. We are more than sure you will find something useful there! The forum is new, so be among the first ones to say Hello!If you are a video game developer and you have a submission to make, you can mail us at team@futuregamereleases.com
Tags
build guide Last Stand the division