Speaking of The Division is fun just as trying out different things. This time, we have something different that sometimes work awesome. Predator & Sentry Combo that might work fine. We’ll tell you how and what we’re running when playing in a party.

Lately, I’ve been comfortable playing with my Sentry gear. A friend of mine decided to try out the Predators mark just for fun.

That’s where the idea came from. Playing The Division with a party of 4 and going Rogue in the Dark Zone is fun. But, are you going to deal the damage you need to take down the enemies fast? 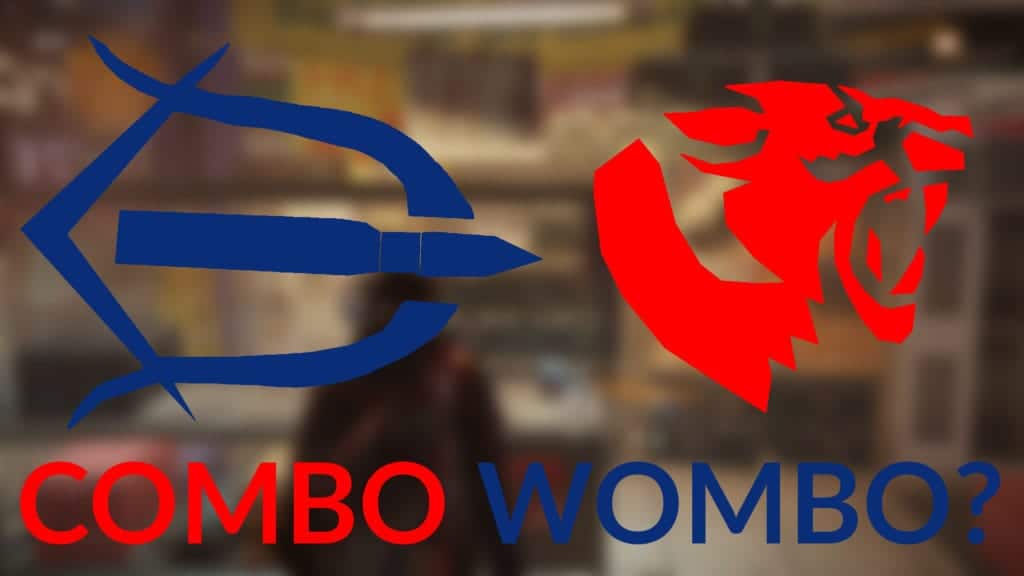 So, from then, we are running a Sentry + Predator’s Mark gear sets, and it seems like the damage output is fantastic.

But, the guy running the Sentry set must be running an Urban MDR for this combo to work. Let’s see why.

So the Sentry’s last bonus talent is “Headshots using semi-automatic weapons mark the enemy, increasing the damage inflicted on the target by 5% for 30 seconds each. A target can receive up to three marks”. See pic below. 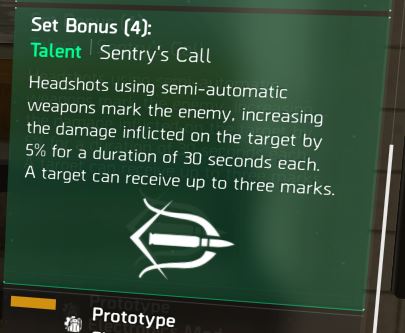 Now, let’s preview the Predator’s Mark talent. The Predator’s last talent is “Hit 10 shots without switching target to make the target bleed for 50% of damage already done by those bullets”. 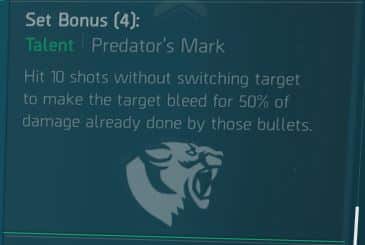 For this combo to work correctly, we are going to need an Urban MDR because of its last talent, Distracted. The ability is “Your damage is increased by 18% against targets with status effects”. 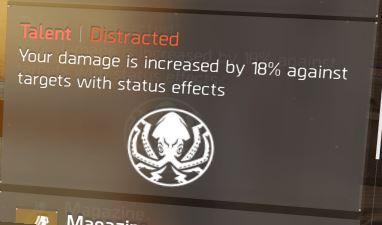 Now that we know the essential talents let’s move towards the explanation.

How does it work?

The guy that is running the Sentry together with an Urban MDR must hit those headshots. On the other side, the guy that’s running the Predator’s Mark job is to hit the body shots without switching target and make the enemy bleed.

You’re both doing each other a big favor regarding damage. By having a 3 Sentry’s Call Marks your whole party is getting increased damage by 5%, ofc, if you’re shooting the guy with the three marks. By having the status effect online, the guy running the Sentry build is getting the +18% damage, thanks to the Distracted talent.

Running the Predator’s Mark together with a Sentry build feels like a must. After we tried it, we do not plan on quitting out. Let me tell you one more time that the Sentry’s Call Marks do not count as a Status Effects. We’ve got that proved in our Sentry Build Guide.

You think this is not working? Well, get your friends together, equip this sets and the Urban MDR and let us know how did it go. We know we’re dealing an insane amount of damage and people are going down like popcorns. It’s useful for every kind of environment, PVP, PVE, so it pays out.

Make sure you try it, and we’ll be waiting for your response in the comments down below. Agent out.

Hello, fellow readers! If you want to get in touch with us and participate in our discussion boards, make sure you visit our Forums. We are more than sure you will find something useful there, as most of the news are coming in there first. The forum is new, so be among the first ones to say Hello!
Tags
guide Predator Sentry the division