Unknown Worlds Entertainment has just announced their new update for Subnautica, called Voice of the Deep. This update brings a lot of new features in the game, gameplay improvements and bug fixes. Keep on reading and find out more about the new cool stuff.

First thing is the Containment Facility. Deep in the ocean, the players will find a Precursor facility with artifacts, history fragments and data repositories. Explore the Primary Containment Facility and find out why there is no one there. You will have a lot of questions. But, who knows, you might find something interesting.

But be careful, you are not alone there. There is this sea creature, called the Emperor Leviathan. Watch your step when entering into the new facility, he might be a problem.

Voice of the Deep update brings changes to the Cyclops as well. The Cyclops are now equipped with better shields and double energy reserves. Also, they have new abilities and can run silently.

The players will find a new network of pipes. Why are they there? Well, the developers wanted to keep this as a secret and said, “They serve a unique purpose in the story of Subnautica, a purpose you will have to uncover on your own.”

The PDA – Personal Digital Assistant just got a new interface, with new icons that will share info about the undersea. Take a look at the image below and see the new PDA look! 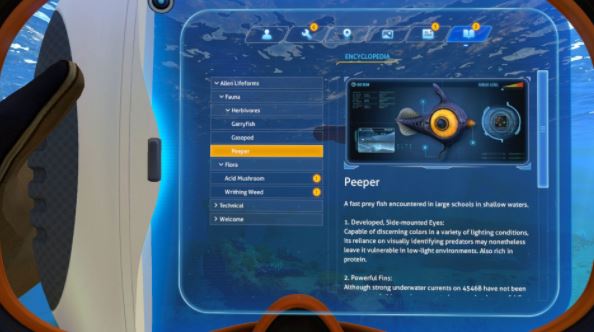 Explore and look for the new Lifepod 7. It contains awesome loot. Search for it in the Crag Field.

For last, find the  Precursor Teleporter Cave in Bulb Zone and Ghost Forest and see where they’ll take you.

Hello, fellow readers! If you want to get in touch with us and participate in our discussion boards, make sure you visit our Forums. We are more than sure you will find something useful there, as most of the news are coming in there first. The forum is new, so be among the first ones to say Hello!
Tags
Subnautica Unknown Worlds Entertainment