Pokemon GO is into a renewal, as surprising as that sounds about a game that went over $1.2 billion in revenue in its first year. The past year, Pokemon Go was having its ups and downs, and Niantic kept committed to adding content.

This approach resulted in the release of the raid battling, a very popular addition that makes the Trainers’ team up to take down difficult Pokemon raid bosses.  While the raids are very new, the end-game community is expending a lot of energy on breaking down the ins and outs of the battles.

In this post, we included a small guide on the most difficult raid bosses right now, the Tier 4 level. There is an infographic that can help break down what the players need to do when they are faced with any of the existing Tier 4 raid bosses in the game. 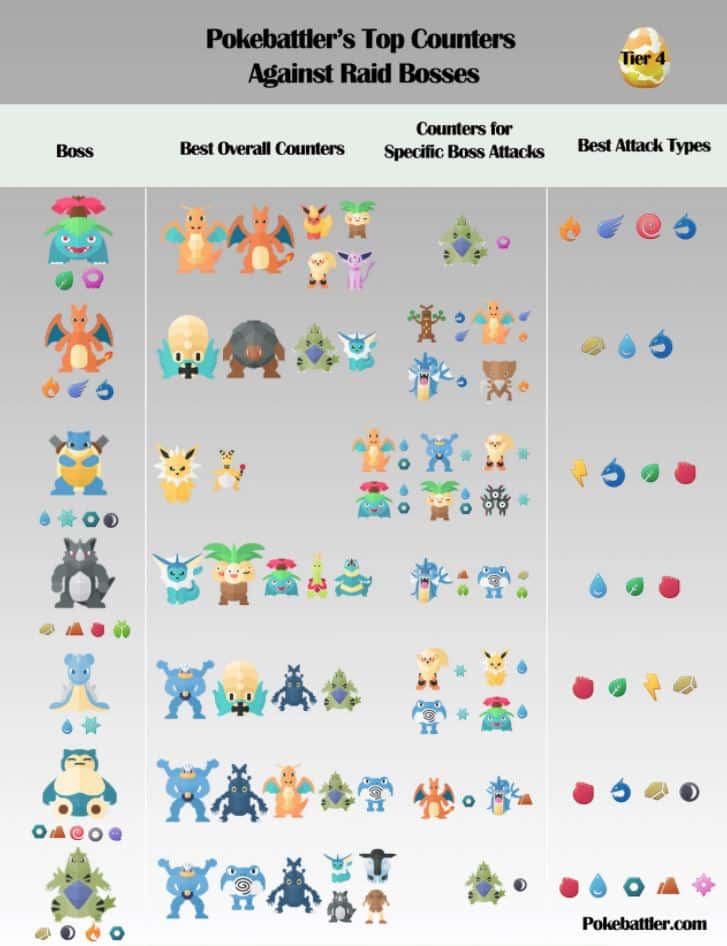 The graphic, thanks to Pokebattler, breaks down to show a possible boss and the potential attack types in the first column, the best counter Pokemon to combat these bosses in the second column, the niche Pokemon that can defend well against specific types of attacks from a boss in the third column, and an overall summary of the best types of attacks trainers can have available during the raid battle in the last. The chart is handy, but we stated a few tips and tricks that can make everything more interesting.

The first thing the chart shows is that Machamp is a house. A Machamp with a Fighting-type move will hard counter the three of the seven possible Tier 4 raid bosses, at the same time providing a soft counter to a fourth if it has an Ice-type move. Dragonite is less versatile, meaning that it is only a hard counter to two of the possible seven Tier 4 raid bosses. These Pokemon offer a higher success rate based on the percentages.

Sadly, there is no easy way to identify the best counter to the boss a player is assigned to. The trainer must start battling him to determine what the moveset of the boss is in the raid battle. It is possible to know that a Pokemon a player brings will not have to deal with weaknesses. But some bosses have four or even five different move types, and it can be sometimes difficult to be prepared for them.

The recent changes to Pokemon Go’s battling system made it more difficult to time a dodge correctly. This is because, when prepared, the only way to lose against the raid boss is to timeout. So it is recommended that the players maximize the way they use their time during the fight, and focus on dealing more damage.

This is a short guide on how to beat Tier 4 Raid battles. These tips should help trainers get better preparation for the trials they will come across during raid battling.

7 Reasons Why we Expect to See Legendary Pokemon for the "Worldwide Event" On July 22, Mewtwo and Lugia are on Their Way