While the Pokemon GO players are waiting to find out in which way will Niantic celebrate the game’s one-year anniversary, there have come new rumors. The alleged leak comes from TeamShuckle, who supposedly have an announcement.

The announcement says some facts about the atmosphere implying that there is an increase in the electric activity.

The announcement is listing many of the Electric Pokemon that will come in big numbers during the events, monsters like Pikachu, Magnemite, and Voltorb. The eggs will most likely spawn Electric Type Pokemon as well, so the players will have greater odds of hatching a Pichu or Elekid. 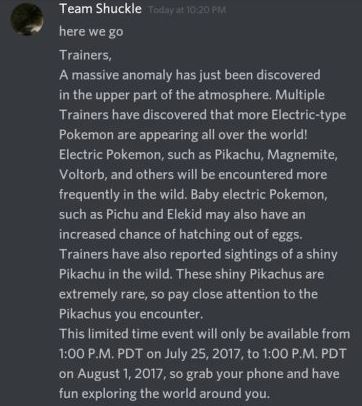 On the other side, the rumors of the rare Pikachu variant can align with an Electric Type event, which will put the Pokemon character at its forefront. The Electric Type Pokemon are a little hard to find in the mobile game, so to offer an event strictly focused on that type will surely generate some interest.

It is quite hard to imagine that Pokemon Go will use its anniversary month to host the Electric type event over something more special. There are also rumors that there will be a Legendary Pokemon event, or maybe a new tier for Raid Battles will come this month.

Whatever Niantic is planning for their Pokemon GO’s anniversary, will most likely happen on July 22nd. There, they are expected to give the attendees a unique experience that is filled with themed activities, while dropping hints for the future of the game. That means that it might be an Electric Type event, or maybe something completely different.

The Electric type Pokemon is very effective against Flying and Water type, and it’s very vulnerable to Ground type Pokemon. Here is the list of Electric Pokemon:

[interaction id=”595e4292f2d4938713c3961c”] Hello, fellow readers! If you want to get in touch with us and participate in our discussion boards, make sure you visit our Forums. We are more than sure you will find something useful there! The forum is new, so be among the first ones to say Hello!
Tags
niantic pokemon go

Battlefield 1: Battlepacks How To Get The New Melee Weapons And Weapon Skins?