Playerunknown’s Battlegrounds becomes a lot juicier. Over the past period of time, the game has become a “title not to miss”. Bluehole might have already broken the 3 mil number, taken into consideration that there’s a test server at this moment for which we do not know if it does apply to the Steam stats counter. 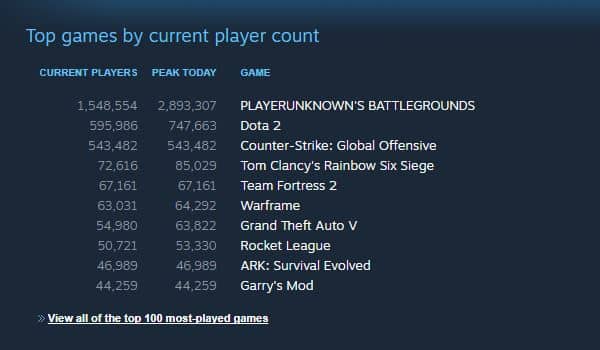 Therefore, PUBG will become one of the games with most concurrent players, ever. Back in the days, we can only relate this success to Blizzard. Back in the days in 2010, WoW was able to gather 12 million subscribers. But again, that cannot be considered as concurrent users yet subscribers. On that field, DSOGaming has just reported that PUBG has broken 22 million sells.

Back to the subject, PUBG will become a record-breaking title that has ever hit 3 million concurrent players on Steam charts. Our assumption is that PUBG will do that by the end of the month, or, when the new update leaves the test servers and goes live.

Angel Kicevski Follow on Twitter November 24, 2017Last Updated: November 24, 2017
0 1 minute read
Facebook Twitter LinkedIn Pinterest Reddit Telegram
Facebook Twitter LinkedIn Pinterest Reddit Telegram
Hello, fellow readers! If you want to get in touch with us and participate in our discussion boards, make sure you visit our Forums. We are more than sure you will find something useful there! The forum is new, so be among the first ones to say Hello!
If you are a video game developer and you have a submission to make, you can mail us at team@futuregamereleases.com