The fourth in a row Community Day event in Pokemon Go brought us a new special Pokemon, Mareep, it’s shiny form, extra bonus and special move. During the 3-hour period, Trainers around the world have been reporting increased spawn rate of Mareep and some of them even hatched a shiny Mareep.

The upcoming Community Day event in May will bring Charmander as the special Pokemon, 3x Catch Stardust, 3-hour lures and its shiny forms. With this being said, we suggest you start getting Charmander candies and hunt high IVs Charmanders or Charmeleons. 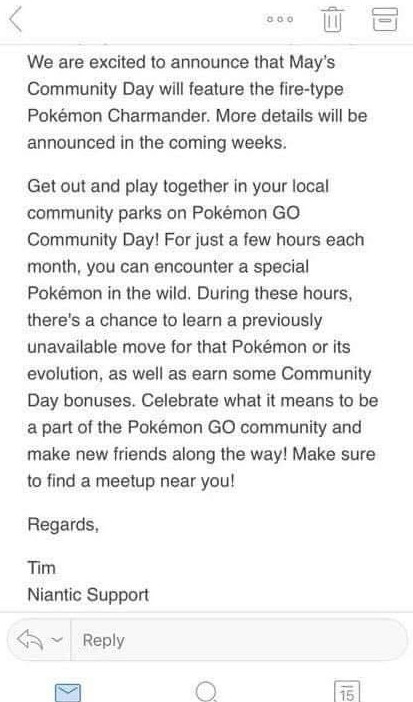 A fully evolved Fire Pokemon can learn a move that is called Blast Burn. This move has identical stats to Frenzy Plant, the one that Venusaur could learn on the third Community Day. So if Niantic decides to match Blast Burn to Frenzy Plant, Charizard could replace Moltres as the highest DPS Fire Type Pokemon.

People do not like Fire Types as much as they should, but this could change. If Charizard becomes the highest DPS Pokemon in the game, it could be a great counter to two future Legendaries, Registeel and Regice.

This is also a wish come true for all of the players that love Charizard and want this Pokemon to get its spotlight in the game. You would like to have several Blast Burn Charizard because he will become the best fire attacker in Pokemon Go.

This might not sound very interesting, but what if I tell you that we are going to see its shiny forms? What about shiny Charizard? Personally, I would love to have that black Flame Pokemon as part of my big Pokemon family!

For those wondering what Charmander’s and its evolution shiny forms look like, I’ve got you covered:

The fifth in a row Community Day event will go live on May 19, featuring Charmander, 3x Catch Stardust, 3-hour Lures, its shiny forms and evolving Charmeleon into Charizard will learn a special move!

Hello, fellow readers! If you want to get in touch with us and participate in our discussion boards, make sure you visit our Forums. We are more than sure you will find something useful there, as most of the news are coming in there first. The forum is new, so be among the first ones to say Hello!
Tags
Community Day May pokemon go