Modern Warfare’s Season 2 is getting started. According to the previously released Roadmap, we’ll onto receiving a lot of tweaks, alongside new maps and more. Once the trailer was leaked, most of the assets coming to the game were somewhat known. However, it is still surprising to see Modern Warfare and its developers pushing forward.

Throughout the rest of Season 2, we’ll receive new Operators including new multiplayer modes. Not all of them will be released at the beginning of the Season, including weapons that may come at a later stage.

But, let’s focus on today’s update. What exactly Modern Warfare has received? 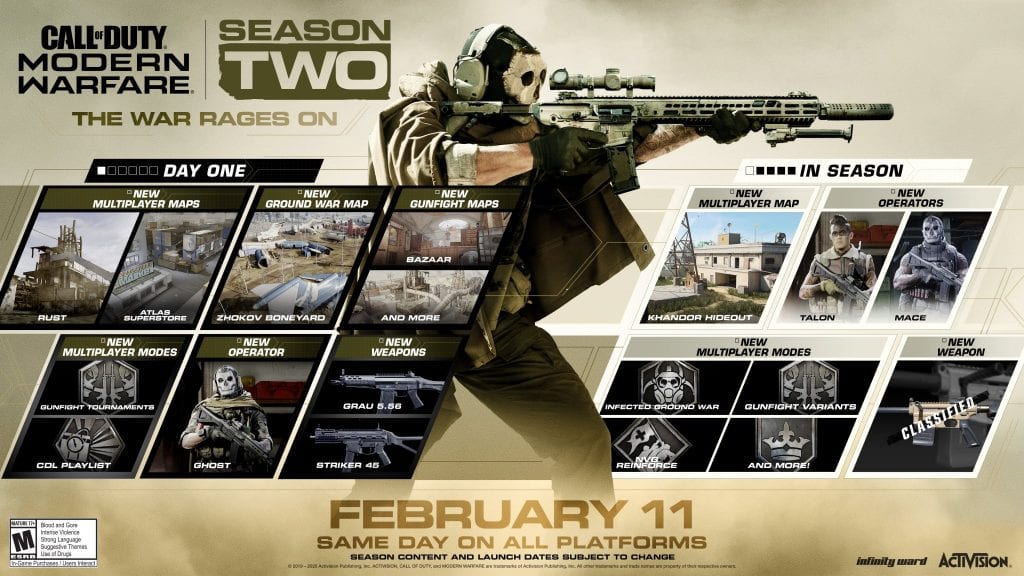 Judging by the image above, Day 1 will bring Rust, which is a small map that will be included in 2v2 as well. New Ground War, Zhokov Boneyard, and Atlas Superstore will also be a part of the mission. Gunfight Tournaments and Col Playlist will enrich the multiplayer gaming experience, while a brand new Operator, Ghost, will also become available to players.

While everyone was eager to anticipate the BR side of Modern Warfare, we have gotten a completely different story. This might be indicating that the BR is not finished, and might need further polishing. Diving deeper, the Roadmap has also exposed upcoming content during Season 2. It won’t stop exactly here, and new content will be developed throughout the whole Season 2.