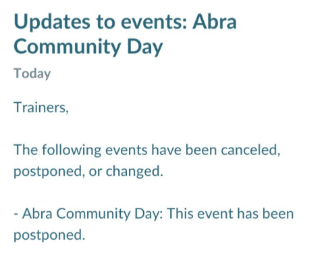 Update: Trainers, March Community Day has been confirmed and starting on March 15, 2020, from 11 AM-2 PM Northern Hemisphere and from 3 PM-6 PM, players will have a chance to earn 3x Catch EX, 3-hour lures and catch Abra and its shiny forms.

The March #PokemonGOCommunityDay featured Pokémon is none other than the Psychic-type Pokémon Abra! 🔮 🥄 ✨ https://t.co/d9NW6x5gaF pic.twitter.com/IKamv8B0a1

The tweet has many fans excited as it strongly suggests that Pokemon Go will feature a Psychic or Shadow Pokemon for March’s Community Day event.

Now, if you pay close attention to their tweet above, you’ll definitely notice the Crystal Ball emoji. This Crystal Ball got us thinking that Abra has 51% to be March’s Community Day Pokemon.

The second theory and all because the shadowy background is that we might get a Shadow Pokemon for the upcoming Community Day, for the first time ever. Maybe they will release Shadow Exeggutor as the Special Pokemon and the new Red Rocket Egg as well. If this is the case, it would be cool to see increased spawn rate of this specific Shadow Pokemon in the wild and get those Team Go Rocket Red Eggs from PokeStops.

They will continue to tease the upcoming Community Day in March in the following days, so join us on the HYPE Train and let’s enjoy the ride!