To be honest, I nailed it with my release date prediction. Shortly after Cyberpunk 2077 got delayed one more time until December 10, I had raised my suspicions that Blizzard would push World of Warcraft Shadowlands release date to December. No one would love to anticipate such a release. Marketing wise, it’s also better to circumvent that. Therefore, my guess was around 15-25 of November. I mean, it had to be. Blizzard was already losing many subscriptions due to the stale game content.

It’s such a relief to get a release date for what’s supposed to be the best MMORPG in the world. To anticipate World of Warcraft Shadowlands’ release date better, make sure you take a look at the release date and times image below, courtesy of Wowhead.com: 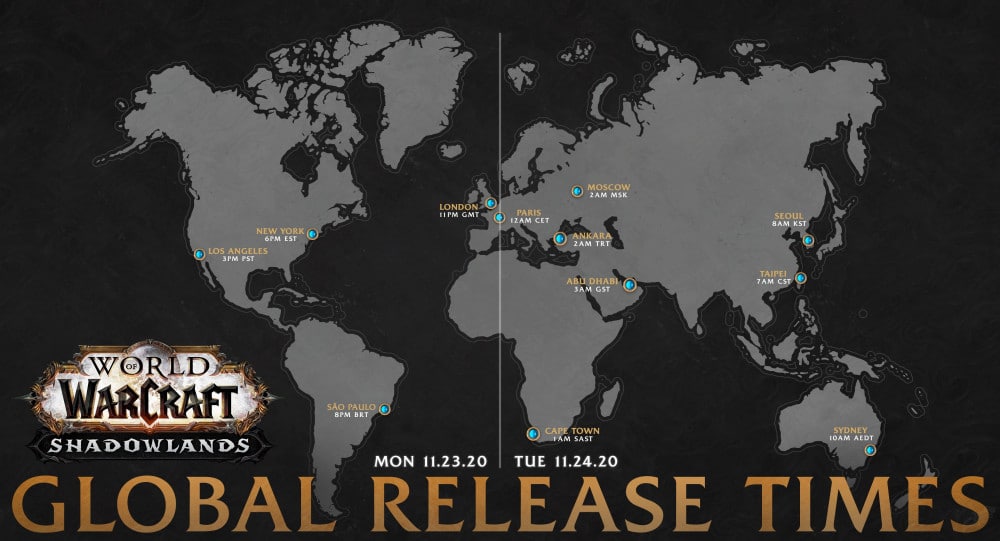 Greetings heroes of the Horde and the Alliance,

On behalf of the entire World of Warcraft team, I’d like to extend a heartfelt thank-you for your patience as we’ve continued to work on Shadowlands, and for all of the words of support after we made the tough decision to delay the game. Today, I’m happy to share that the expansion will be arriving November 23 at 3 p.m. PST (November 24 at 12 a.m. CET).

We’d like to thank everyone across the WoW community who helped us get where we are today, including players leveling up new characters in the Shadowlands pre-patch (and keeping Azeroth’s barbers extra busy), as well as all the beta testers who continue to provide us with invaluable feedback on the expansion.

Since we first told you about our decision to delay, we’ve used the time to further polish the expansion and shore up the endgame, including overhauling the combat and rewards in the Maw, and reworking the Covenant systems to make your choice more immediately impactful and have clearer long-term goals. Now the team is in a great position to get things the rest of the way to the finish line before November 23—and as always, we’re committed to working with you to improve the game for as long as you’re out there playing it.

Now that we have our launch date, we’re also excited to tell you that our pre-launch event will kick off November 10, so steel yourselves to take on a flood of the Scourge. In addition, we’ve set a December 8 date for the opening of our first raid, Castle Nathria—which takes players into the heart of Sire Denathrius’ lair in Revendreth—along with the start of Shadowlands Season 1.

We’re looking forward to seeing everyone take their first steps into the Shadowlands and forging their destinies—but in the meantime, we’d like to show you just a little bit of what’s waiting for you beyond the veil.