The mobile games that have post-apocalyptic settings have the biggest increase in player-spending in the U.S. During the first three quarters of 2020, Sensor Tower Store Intelligence has said that player-spending has increased over 106%, which makes the fastest-growing game setting by revenue.

The newest Game Intelligence features by Sensor Tower grades the increase of the games by looking into the setting, art style, camera POV and theme. This “algorithm” is quite helpful because it shows which features are most liked by gamers. 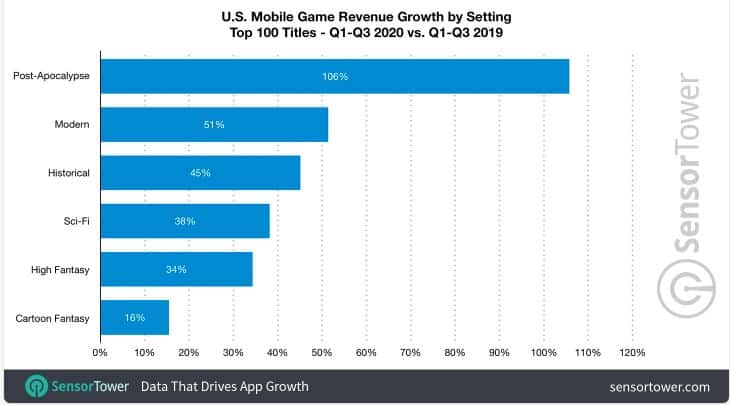 The setting that is most liked is the Post-Apocalypse, which most of the top titles like State of Survival, Last Shelter: Survival has. This setting rose to 106% for player spending, which is $384 million. The second setting is Modern, which increased by about 51%, making it the most lucrative game setting. The third-place goes to Historical, with $739 million.

The fastest-growing game art style is Retro- Low Poly, which saw an increase of nearly 95%. The important titles that have this art style are Roblox and Minecraft. The second place is given to 3D Anime, which had player spending of 84 percent. The third-place goes to 3D Realistic, with the revenue increasing to 54%. The most lucrative style was 2D Cartoon, which had increased up to 38% more than last year.

This new feature can track rising trends way easier, which is crucial for the developers and their competitors.

Do you have a personal favorite?

Hello, fellow readers! If you want to get in touch with us and participate in our discussion boards, make sure you visit our Forums. We are more than sure you will find something useful there! The forum is new, so be among the first ones to say Hello!
Tags
mobile game The US