The December Community Day 2020 exclusive Special Research story is a pay to play event and only those who will purchase the $1 ticket will be able to participate. 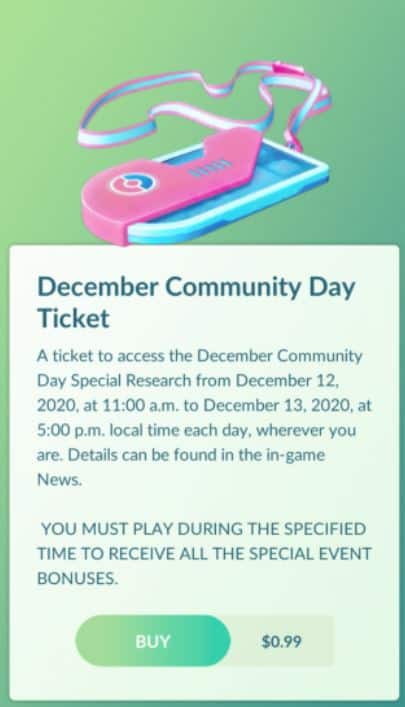 Hello there, %PLAYERNAME%! It’s so great to see you. Can you believe this year is already coming to a close?

It’s almost as if Pokémon in the wild can feel it, too. A few seem to be appearing in greater numbers than usual!

Strangely enough, the Pokémon appearing more frequently at the moment seem to be the same as those that did so previously throughout this year.

Seeing all these Abra, Rhyhorn, and Piplup in the wild is making me a bit nostalgic. We’ve had quite a year, haven’t we?

As you venture out to catch these Pokémon, I think it might be nice to reminisce on some of the highlights from this year and how much you’ve grown as a Pokémon Trainer along the way.

Great job catching all those Abra, Rhyhorn, and Piplup, Trainer.

As you were doing that, I was busy thinking about all we’ve accomplished together this year.

We discovered the secrets of trade Evolution and met a vast variety of Pokémon originally discovered in the Unova region.

We even encountered Legendary Pokémon like Tornadus, Thundurus, Reshiram, Zekrom, Landorus, and Kyurem!

Then there were the Pokémon originally discovered in the Galar region. I was particularly excited to see Galarian Ponyta, Galarian Rapidash, and Sirfetch’d!

Oh! And who could forget the mysterious appearance of Mega-Evolved Pokémon?

Hard to believe we fit all that into one year, eh, %PLAYERNAME%?

Anyway, I’ve rambled on long enough. It’s time for you to get back out there and catch some more Pokémon!

Ah—Weedle, Gastly, and Seedot. The stars of some memorable days this past year! I still get a bit jumpy at the sight of acorns. Haha!

Gastly gave us a bit of a fright as well. Remember?

You know, Gastly isn’t the only gaseous thing we saw in abundance this year.

That’s right—I’m talking about Team GO Rocket taking to the sky in balloons! An almost cartoonish mode of transportation, and yet surprisingly effective.

You know, if the members of Team GO Rocket weren’t so devoted to villainy, their assets and energy would likely make them great allies.

I hope that world comes to be someday.

Ah, pardon my wistfulness. I tend to get more and more pensive as the day wears on. Does that happen to you as well?

Perhaps you can ponder that while you go out and catch more Pokémon, %PLAYERNAME%!

It’s certainly been an interesting year, hasn’t it, %PLAYERNAME%? I can’t remember another one like it, and I’ve seen a few!

But despite all the ways it’s challenged us, I can’t help but think that it’ll make future experiences feel even more precious and special.

After all, no matter what happens, we’re all on this Pokémon journey together—every Trainer, regardless of where they are in the world.

So when the going gets tough, remember that you’re not in this alone. And while bad days are inevitable, I like to think they make the good ones that much sweeter.

I hope today has been one of the good ones for you!

The world is ever-changing, %PLAYERNAME%. What doesn’t change, however, is the fact that we have each other and our Pokémon.

And as the mysterious world of Pokémon continues to grow, so do we—as Trainers, as a community, and as people.

So here’s to a year for the books—and many more exciting ones to come!

That’s all for now Trainers! Good luck and let’s catch ’em all!