Ubisoft has just delayed the release date of their very hyped remake. The very beautiful action-adventure, Prince of Persia, Sands of Time, has been delayed to March 18, 2021. This was announced by UbisoftCZSK, Ubisoft’s studio based in the Czech Republic.

The official publication and postponement announcement can be found below. 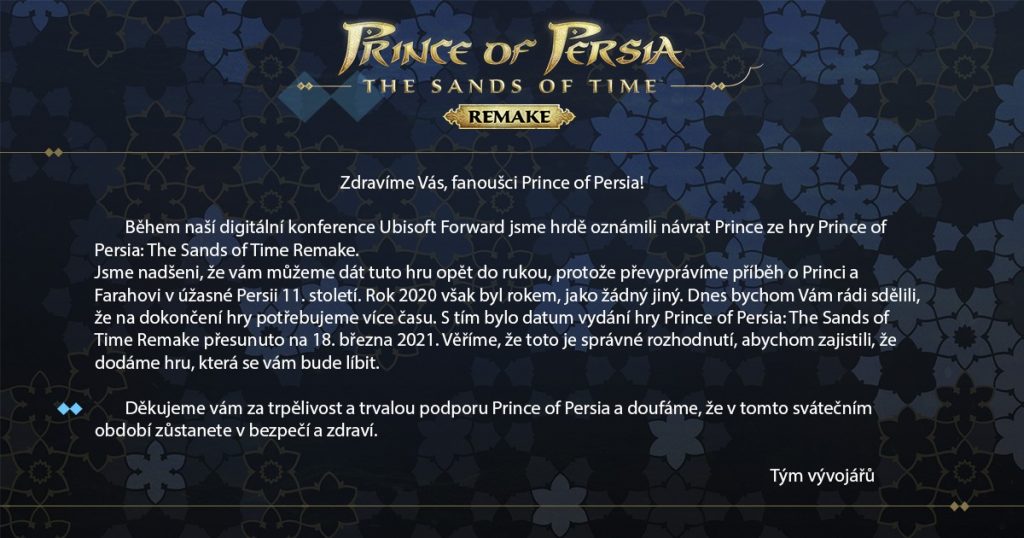 Well, the English version of the message would go like this – translated by Google Translate but modified for accuracy:

During our Ubisoft Forward Digital Conference, we proudly announced the return of Prince of Persia with the Remake.

We are excited to put this game in your hands, retelling the story of the Prince and Farah in the 11. century. But, 2020 was a year like no other. Today, we would like to tell you that we need more time to finish the game. The release date of the remake has been moved to 18 March, 2021. We believe this is the right decision to ensure we deliver a game you like.

Thank you for your patience and continued support. Ubi.

It seems that Ubisoft’s attempt to bring this classic adventure back to life will require more time to finalize things and polish the game completely. Prince of Persia: The Sands of Time delay is somewhat justified. If a game needs further polishing, everyone should accept it and support the developer’s move. Better safe than sorry.

Hello, fellow readers! If you want to get in touch with us and participate in our discussion boards, make sure you visit our Forums. We are more than sure you will find something useful there, as most of the news are coming in there first. The forum is new, so be among the first ones to say Hello!
Tags
Prince of Persia: The Sands of Time ubisoft