To access the Special Research “Stop and Smell the Roselia” story players must get a ticket, which costs $1, and enjoy all features and bonuses from the Research. This ticket will automatically activate to give you access to a Special Research on February 7, wherever you are in the world. 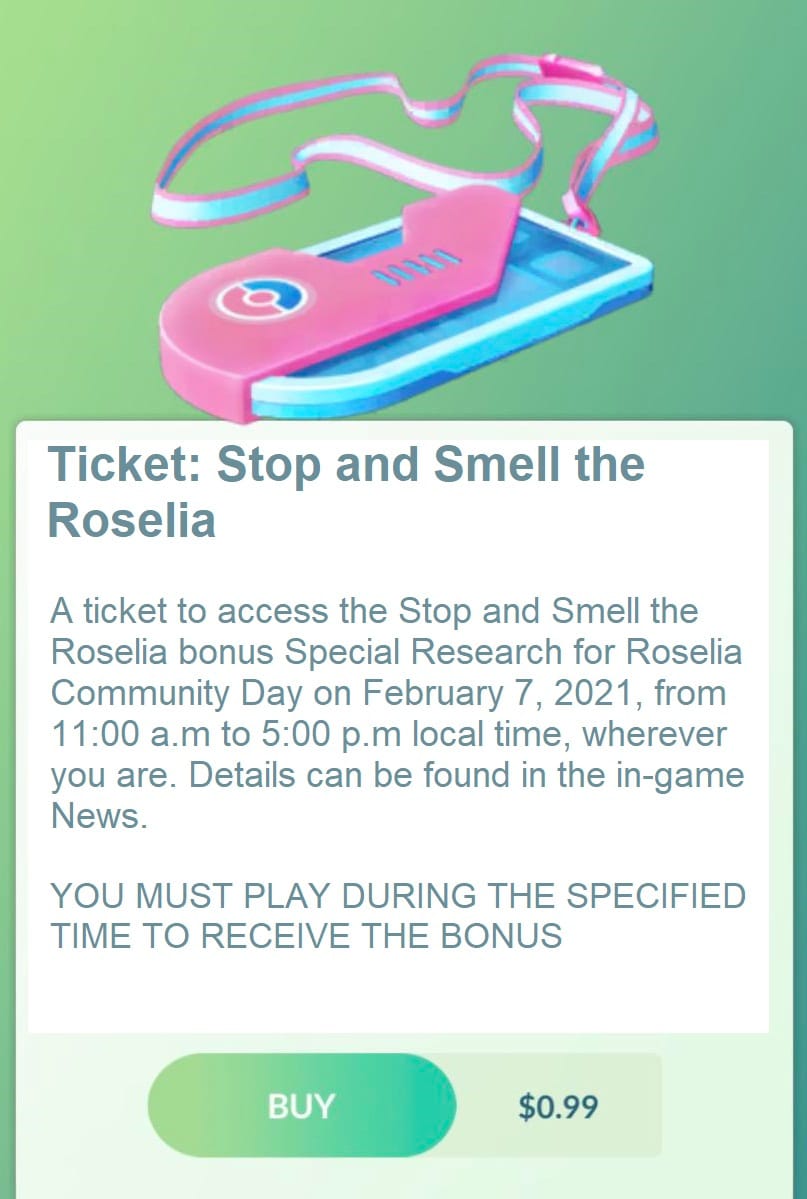 Check out the story for the “Stop and Smell the Roselia” Special Research below.

Stop and Smell the Roselia Story

Ahhh… Do you smell that, Trainer?

I first caught a whiff of that curious aroma as I was out on my daily morning walk.

Upon investigation, I discovered that the scent was being produced by an uncommonly large group of Roselia that had assembled nearby.

Did you know you can judge a Roselia’s health by the strength of its aroma? Well, let me tell you—those were VERY healthy Roselia!

But while they certainly smell nice and look pretty, I advise you to take care when encountering them.

The thorns on Roselia’s head contain a vicious poison, and it can launch them at any opponent bold enough to try to steal the flowers on its arms. Every rose, as they say!

It’s unusual to see so many Roselia in one place. Would you mind assisting me in researching this phenomenon?

While you were out in the field, I did some reading on Roselia.

When it comes to Pokémon, new discoveries are being made all the time—so it’s important to make sure your information is up to date.

Roselia, the Thorn Pokémon, evolves from Budew, the Bud Pokémon. Budew is sensitive to changes in temperature, and its bud is said to bloom when warmed by the sun.

It’s also both Grass and Poison type, much like Roselia.

In reviewing these two Pokémon, I remembered something tremendously exciting! I still need to conduct a bit more research before sharing my findings, however. Would you mind assisting me?

A big group of Muk gathered under the sun… The whole place would smell like baked garbage!

Oh! Hey there, %PLAYERNAME%. Didn’t realize you were back.

I found that interesting bit of information I wanted to share with you.

According to my research, Roselia that drink nutritionally rich springwater are said to reveal rare coloration when they bloom.

Isn’t that fascinating? Have you seen anything like that while you’ve been out doing research?

You seem to have a lucky streak, so I wouldn’t put it past you!

Now that you’re back, I’d like you to evolve a Roselia with the Sinnoh Stone I gave you.

RESOURCE ID: quest_special_dialogue_roset_2_8
TEXT: I’m excited to see the final Evolution in this line of Grass- and Poison-type Pokémon!

Great work, Trainer! Your Roselia has evolved into the Bouquet Pokémon, Roserade!

It moves like a dancer and strikes with whips that are densely lined with poison thorns.

Oh, and have you noticed that each of Roserade’s hands is a different color?

What an amazing Pokémon!

Thanks for all your assistance today, Trainer. Documenting situations like this is essential to learning more about the Pokémon in the world around us.

Until next time, let’s GO!