Halo Infinite is 343 Industries’ upcoming shooter that has set the bar quite high. Fans worldwide are also excited about the potential outcome, and they’re eagerly waiting for any tiny details that might surface online. In the latest “Ask343” gathering, 343 Industries has revealed a couple of important details both about the single-player and multiplayer.

Thanks to a Reddit thread, all of the important questions have been filtered. The developers have discovered general ideas, weapon mechanics, day and night cycles, and more. Apparently, Halo Infinite won’t support Dual-Wielding, because the developers are more focused on weapons, grenades, melee, and equipment.

Believe it or not, it was also confirmed that Halo Infinite is not open-world. Halo Infinite will provide a mission-driven narrative. Hence, there will be multiple objectives, but they won’t player’s progression and inventory at all. Hence, the freedom to do things is still there. At least that’s how I’d boil it down.

Furthermore, the developers stated that the Day and Night cycle is quite advanced as it affects the enemies players run into. For example, Grunts are sleepy at night, while Phantoms have searchlights. The same applies to other enemies too.

There are so many highlights from the latest Ask343, and we would like to encourage you to read them below.

CONFIRMED: There is no hostile wildlife in the game at the moment. There are apparently some cute “space gophers” though, so that’s cool. There is wildlife that is bioluminescent that appears at night.

CONFIRMED: There are no playable Elites (sadness) being supported because “this is a Master Chief and Spartan story.” They did say “never say never” to that and that we may see them one day in the game.

CONFIRMED: Weapon upgrades were toyed around with as an idea for the campaign for customizing them and such, and they felt it was a rabbit hole, but the game veered too far away from what Halo is about, so they decided to take a “different avenue” in things you can progress. You are able to upgrade equipment items you unlock throughout the game, and there are “cool weapon variants” you can find and unlock in the game.

CONFIRMED: You can hold only one piece of equipment in Multiplayer, and it is currently a “use it and it is gone” sort in the Multiplayer. They do, however, want to implement tools so that you can change this in custom games to allow multiple pieces of equipment to be used at once.

CONFIRMED: The game is not open world. It is inspired by missions like Silent Cartographer, as an example. Paraphrasing a bit here, but an example they gave was what if you could keep a Scorpion you had at the end of one mission and take it to the next? What if you could take that scorpion, and instead of driving it up to a gate, you took it up a hill and destroyed a wraith before it even knew you were there? The world has many paths to get to the objectives you need to reach. Like Silent Cartographer on steroids.

CONFIRMED: There will be multiple biomes. “Pacific Northwest” is the primary biome, but there will be sub-biomes, such as swampy wetlands, wartorn areas referred to as “the Deadlands” which feature environmental storytelling, hexagon caves, forerunner architecture to explore, Banished bases.

CONFIRMED: The hexagonal pillars are still an important environmental structure as an “underlying” structure of the damaged ring. They have continued to work on their rendering, such as their shaders and how they are grouped.

CONFIRMED: Nothing is stopping you from, for instance, grabbing a banshee is jumping to some objectives farther out in the story. You can do that. The story is structured with a general path, but there are multiple places you can go outside of the primary story beat that is present in the game, allowing you to stray from the path, rescue marines, fight Banished, explore structures, regardless of if that is what the game demands at this moment. The core story serves as an ever-present anchor that will often drop you off, so you can’t jump ahead and experience primary story content, but side areas and invisible walls are not what limit you. He story is crafted to flow you through the areas in a natural way. So…

CONFIRMED: There is a linear thread still, and the story will progress in a linear fashion. Some areas will unlock and be visitable based on your progress in the story, or you may be able to find things because of what vehicles you now have access to, you can take Marines with you that you’ve rescued. You can’t cut ahead in the story, but it’s up to you how you tackle it.

CONFIRMED: There are many ways to find story elements on Zeta Halo beyond the “Golden Path.” An example given was a crashed pelican that has skidded across the terrain.

CONFIRMED: There are audio logs in the game you can find that tell stories of battles on the ring, personal stories, etc. They compliment environmental storytelling in many areas as well. They were likened to a “cool radio drama.”

CONFIRMED: The ring in the skybox is a full 3D model, not a painted skybox so that the ring can have a characteristic attribute to it. This also makes it much easier to see directly where the areas you are present on on the ring connect to the actual ring, as well as allowing it to cast more realistic shadows onto the world. There is even a point where the ring briefly will eclipse the sun and give a cool “midnight feel.”

CONFIRMED: They have put a lot of effort into mixing relatable scenery (trees, etc.) with the major megastructures, rocks, etc. that will be found so that the sense of scale will not be lost on the player.

CONFIRMED: Banished maintain their “heavy metal, red war paint” aesthetic from Halo Wars 2 which we will see in their structures, etc. We will see they have structures with spikes that were dropped from orbit and dug into the environment, slammed onto the ground, crushing whatever was below, which contrasts against the environment.

CONFIRMED: Yes, you can knock things off of the edge of Zeta Halo. An example given was a while playing they even managed to, by luck, knock a Wraith off of the ledge of the ring and into the abyss. It is difficult, but it can be pulled off with luck and skill combined.

CONFIRMED: A lot of the concerns brought up by the community after the July reveal was on a list of things they wanted to address, and they are thankful for the extra time to do so.

CONFIRMED: There will both be outposts and bases you can encounter, as well as patrols and random encounters you can come across between locations.

CONFIRMED: There is a system in place to recognize what you have done/are doing. If you are on foot, encounters will spawn that are meant to be fun to do on foot, but if you come in a flying vehicle, there will also be things there that are designed to be fun to encounter while flying. This is not designed to punish you, simply to be a fun encounter based on how you’re exploring.
EXAMPLE: In previous Halo games, the linear experience was designed around what vehicles they knew you may have. But here, encounters are designed to be fun in, say, a Wasp (he mentioned the Wasp specifically, so this seemingly confirms the Wasp will be in the game.) and so will spawn if you are in a Wasp.

Hello, fellow readers! If you want to get in touch with us and participate in our discussion boards, make sure you visit our Forums. We are more than sure you will find something useful there! The forum is new, so be among the first ones to say Hello!
Tags
343 industries Halo Infinite 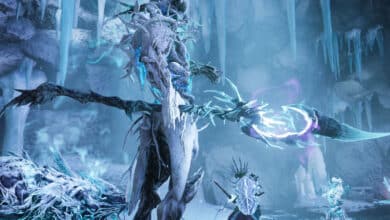