After EFT patch 0.12, some novel additions in the Graphics settings, such as TAA (Temporal Anti-Aliasing), and other options players can choose from and set up what they strive for. Again, when it comes to a game where you either win or lose it all, the balance between performance and imagery is very important.

In the end, in Escape From Tarkov, it’s all about the balance. The balance between performance and visibility is undoubtedly the most important. Having a satisfying amount of FPS while being able to designate your enemy (a “bush Wookie” or ambient occlusion camouflage master) indeed pays out. We have experimented with all the graphics settings on each map, measuring and evaluating both the performance and visibility. Without further ado, let’s take a look at our best EFT settings below:

First of all, the ability to spot enemy players at a large distance relies heavily on the FoV (Field of View). Escape from Tarkov is using a vertical FoV. The FoV represented there differs from other video games which are normally using horizontal FoV. I would put it simply like this: the larger the number is, the wider the perspective, but the smaller the people you see in the distance (100m and above). It also obstructs the gunplay. For example, sniping. Zeroing on different FoV’s feels different, shoots different, so playing at one FoV and getting used to it is always a good idea.

Keep in mind that the settings above fit perfectly with a visor. Not too blurry, not too sharpen, but just the crispy clear image you need to operate with.

There are some pros and cons, and Escape From Tarkov still doesn’t represent the final product, which means further polishing will be done, including new content alongside the slew of updates.

The most important thing during patch 0.12 is to make sure the game is running in Fullscreen. For some reason, it bugs out, and even if the setting states the game is in Fullscreen, it might be in windowed mode. Therefore, after entering a raid, make sure you’re still in Fullscreen by re-saving the graphics options. Useful for retaining a substantial FPS. 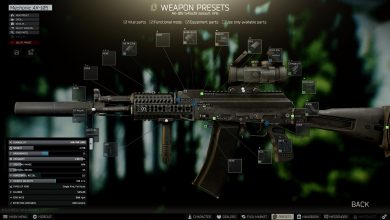