We live in a world where multiple companies hungry for power are looking for any assets they can get under their wing. Today’s event is somewhat similar to what happened with the acquisition of Codemasters. Square Enix, however, has come out with a denying statement, which can be found below. 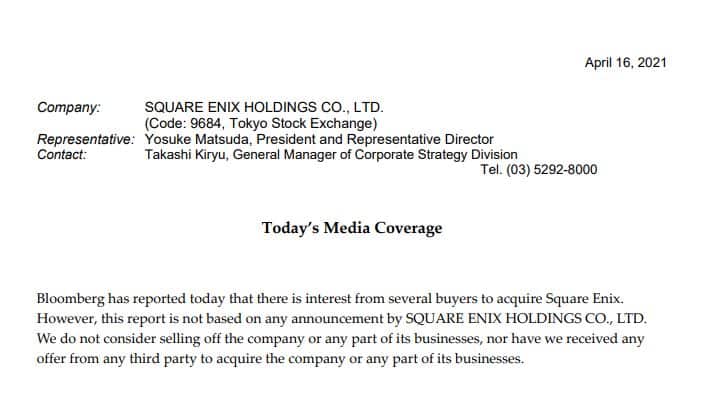 Even if Bloomberg’s statement is holding false information, there may still be a spark of interest in companies like Sony and Microsoft. The potential acquisition falls in Microsoft’s favor slightly more because of their recent swing on the market. After acquiring Bethesda, Microsoft has turned towards the globally renowned VoIP platform, Discord, which is primarily used for gaming, and it’s looking for its acquisition. With Microsoft’s Xbox Game Pass and its recent impact on gamers, it’s nothing weird if we see Microsoft breathing in Square Enix’s neck.

Hello, fellow readers! If you want to get in touch with us and participate in our discussion boards, make sure you visit our Forums. We are more than sure you will find something useful there, as most of the news are coming in there first. The forum is new, so be among the first ones to say Hello!
Tags
Bloomberg microsoft sony Square Enix

State of Decay 2 is available on Xbox Game Pass