These are all of the tasks and rewards for the From Scalchops to Seamitars Special Research quest.

Hey there, %PLAYERNAME%! I came across a truly surprising sight recently while going for a walk—trees in the nearby forest were covered with slash marks!

I’ve heard of a Pokémon called Oshawott, the Sea Otter Pokémon, that can detach the scalchop on its stomach for use as a blade. Maybe the slash marks were caused by all of the Oshawott nearby?

Let&#x27;s use this as an opportunity to go and catch some of those Oshwott so we can find out more!

Hey %PLAYERNAME%! Did you know that Oshawott doesn&#x27;t just use the scalchop on its stomach to fight, but that it can be used to break open hard berries as well?

Maybe we can learn even more about Oshawott once it evolves into its next Evolution: Dewott! Don’t let its cute exterior fool you—Dewott takes itself very seriously.

I barely have the coordination to rub my tummy and pat my head at the same time and we have creatures that have their own special battle techniques. Truly inspiring stuff!

I’m starting to understand a bit more about this Pokémon now. And I have an inkling that we’ll get to learn even more soon!

It’s Evolution, Samurott, apparently uses swords incorporated in its armor called seamitars. Apparently in the time it takes a foe to blink, it can draw and sheathe the seamitars attached to its front legs.

Sounds like it’s a true master of its craft! No wonder it’s known as the Formidable Pokémon! Let’s evolve Dewott and see this mastery for ourselves, %PLAYERNAME%?

Well would you look at that, %PLAYERNAME%, a Samurott in the flesh! It’s seamitars truly are a sight to behold. Knowing it can draw and sheathe its blades in a blink of an eye, I wonder how fast it can dice up berries…

Thanks for all your help today, %PLAYERNAME%. We’ve learned so much about Oshawott, Dewott, and Samurott—and from them too! I’ll SEA you next time! Ha-ha!

Hello, fellow readers! If you want to get in touch with us and participate in our discussion boards, make sure you visit our Forums. We are more than sure you will find something useful there, as most of the news are coming in there first. The forum is new, so be among the first ones to say Hello!
Tags
Community Day niantic pokemon go 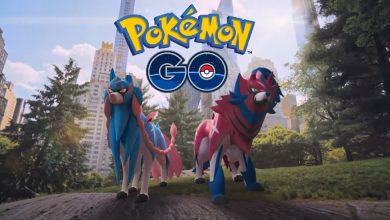