The classic game Shatter is officially coming back to life, through a remastered version developed by PikPok.

The recently announced game Shatter Remastered Deluxe will launch towards the end of 2022 on PlayStation 5, PlayStation 4, Xbox Series, Xbox One, Switch and PC (via Steam). If you are interested in buying it once it releases, it will be available worldwide for $9.99.

As opposed to the classic Shatter, the remastered version will be available in a 4K resolution running at 120 fps, with a new user interface and many tweaks that will make the user experience better. Featuring 10 worlds, Shatter Remastered Deluxe will offer nine bosses, power-ups, special attacks and other content to come.

There will be five game modes named Story, Endless, Boss Rush, Time Attack and Couch Co-Op, with 71 levels and a “Suck and Blow” mechanic. Besides this, you can show off your success on the Global Leaderboards.

There isn’t an official release date yet, but we will make sure to report it as soon as it is announced.

Ivana KachurovaMay 17, 2022Last Updated: May 17, 2022
0 1 minute read
Facebook Twitter LinkedIn Pinterest Reddit Telegram
Facebook Twitter LinkedIn Pinterest Reddit Telegram
Hello, fellow readers! If you want to get in touch with us and participate in our discussion boards, make sure you visit our Forums. We are more than sure you will find something useful there! The forum is new, so be among the first ones to say Hello!
If you are a video game developer and you have a submission to make, you can mail us at team@futuregamereleases.com 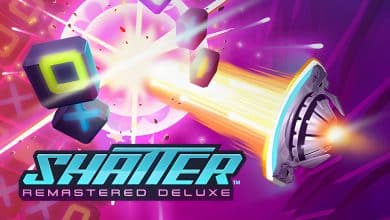