Players have already shown their frustration after Valve deployed a new patch for Dota 2. Dota 2’s latest 7.31d patch was supposed to fix a couple of issues and introduce further item balancing but introduced new types of problems players have to deal with. There are tons of reports on this issue, and the community is trying to attain Valve’s attention.

The player frustration has found its place, and that is on Reddit, where tons of players discuss their most recent and unpleasant Dota 2 encounters. If you’re having familiar issues or cannot play like a decent human being, then this is your right spot:

Make sure you show your anger and hope that Valve sees it.

Could it be the rendering API?

Believe it or not, this update could’ve messed up the default DirectX renderer API. Speaking of rendering API, this update has already addressed a significant performance improvement aimed at removing hitching when playing with the Vulkan renderer. But that might have pretty much also messed up the default renderer. Therefore, if you’re having similar troubles, or cannot endure a smooth gameplay experience, then you might try swapping to the Vulkan Rendering API, as some people have already reported a better outcome by using it.

This update also includes a significant performance improvement aimed at removing hitching when playing with the Vulkan renderer. Dota now supports the VK_EXT_graphics_pipeline_library extension which eliminates draw time hitching due to shader compilation. This feature is currently supported only in the NVIDIA Vulkan Beta driver available https://developer.nvidia.com/vulkan-driver, with future support expected in mainline drivers by NVIDIA, AMD, and Intel.

Over on Github, a new Dota 2 issue has been opened that asks for reports by people encountering similar problems, which brings hopes of faster debugging.

Amie GammonsJune 10, 2022Last Updated: June 10, 2022
0 1 minute read
Facebook Twitter LinkedIn Pinterest Reddit Telegram
Facebook Twitter LinkedIn Pinterest Reddit Telegram
Hello, fellow readers! If you want to get in touch with us and participate in our discussion boards, make sure you visit our Forums. We are more than sure you will find something useful there! The forum is new, so be among the first ones to say Hello!
If you are a video game developer and you have a submission to make, you can mail us at team@futuregamereleases.com 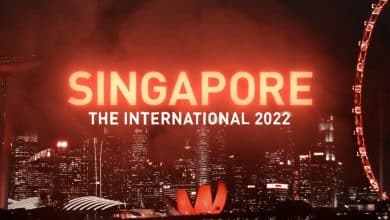 Dota 2’s The International 2022 will take place in Singapore