Gamigo is announcing a new day will dawn in its popular voxel-based MMO, Trove: Starting on June 28, 2022, Trovians playing on PC can begin exploring the “Sunrise” update, which includes the new Solarion class, the new Sundered Uplands biome, Ultimate Bosses in new 5 Star Dungeons, and much more!

As a celebration of the launch, the developer published Trove Sunrise official trailer that can be watched in the YouTube Player embedded below

The new Solarion class works as a servant of the Sun Goddess to smite enemies through a combination of their bow for long-range attacks and a pet phoenix that rushes in with fast and fierce melee attacks. This fired-up class uses their Phoenix Radiance passive ability to increase their attack rate and gain energy to summon a pet phoenix to aid in battle.

Now that we’re well acquainted with the Solarion, it’s time to introduce players to Trove’s newest biome, Sundered Uplands. Trovians that reach Uber-1 Adventure Worlds can explore this biome’s unique upper and lower levels, but it’ll primarily be found in Uber-7 Adventure Worlds and will certainly give them more of a challenge than neighboring biomes. Be mindful that both levels aren’t created equal as the Irradiant Sky Giants build and expand land stolen from down below. This tips the balance of power in their favor, resulting in a biome filled with many challenges:

Angel Kicevski Follow on Twitter June 22, 2022Last Updated: June 22, 2022
0 2 minutes read
Facebook Twitter LinkedIn Pinterest Reddit Telegram
Facebook Twitter LinkedIn Pinterest Reddit Telegram
Hello, fellow readers! If you want to get in touch with us and participate in our discussion boards, make sure you visit our Forums. We are more than sure you will find something useful there! The forum is new, so be among the first ones to say Hello!
If you are a video game developer and you have a submission to make, you can mail us at team@futuregamereleases.com 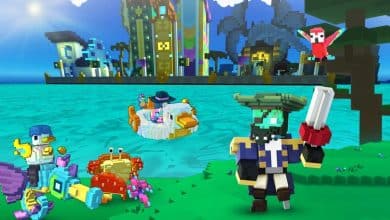 Trove Celebrates 7th Birthday with the Launch of Sunfest