With the installment of update 0.13, Escape From Tarkov has removed one of the best benefits of the Propital injection, which was the “Remove Pain” effect for the duration. Earlier today, the developer decided to return the same painkiller effect, which is what made this injector among the most popular and used ones in the game.

This is what the stimulant is capable of at this very moment: 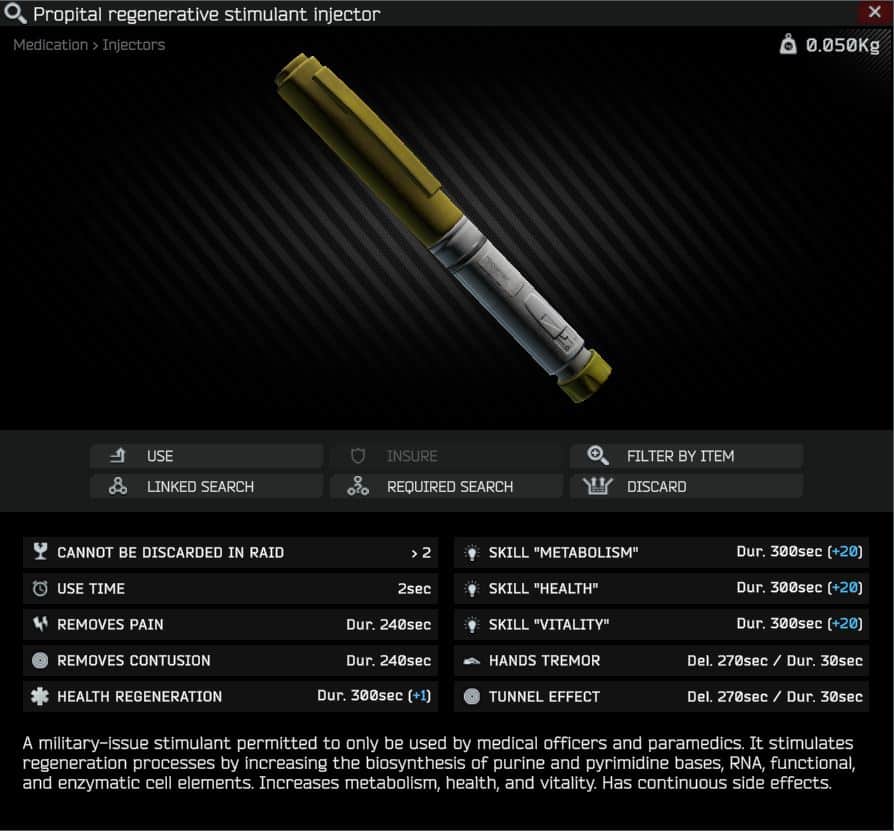 The change occurred shortly after the tinkering of the Morphine injector, which for a brief moment lost its painkiller effect. Each stim in Escape From Tarkov offers different enhancements, and the Propital injection was one of the best ones to use while doing surgery, recovering, or before getting involved in a rough firefight.

As it seems, Battlestate Games is still on a lust of altering some of the existing items, traders, and other bits and pieces that have been frustrating players recently.

Angel Kicevski Follow on Twitter January 23, 2023Last Updated: January 23, 2023
0 1 minute read
Facebook Twitter LinkedIn Pinterest Reddit Telegram
Facebook Twitter LinkedIn Pinterest Reddit Telegram
Hello, fellow readers! If you want to get in touch with us and participate in our discussion boards, make sure you visit our Forums. We are more than sure you will find something useful there! The forum is new, so be among the first ones to say Hello!
If you are a video game developer and you have a submission to make, you can mail us at team@futuregamereleases.com

Escape From Tarkov Banned 9,000 Cheaters in One Ban Wave

Escape From Tarkov: Scavs Will Get Daily Tasks from Fence