Those who were abused, 63 percent of them said that this abuse happened online. Around 40% of the abuses online happened via messages and 32% could be safely defined as sexual harassment.

This is only pushing away the female gamers from the inclusive community that most games are promoting. 23% of the women said that they will never reveal that they are female while they are playing multiplayer games. 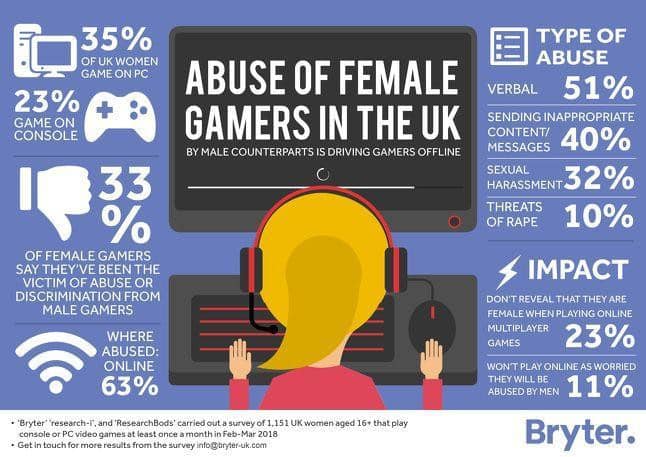 The popular streamer Annemunition posted a clip on Twitter in which she is outing some of the ones that abused her during a Rainbow Six Siege game. Even though her team won, one of her teammates still said to her: “I hope you die.”

“Why don’t you use voice chat?”
“Why can’t I find a girlfriend who plays video games?”
“Why do you mute people who ask you if you’re a girl?”

Meanwhile, on Overwatch, a woman posted an open letter to the community. Her letter was about her experience as a woman who is playing online, but the thread had to be locked later. Some Redditors flooded the thread with misogynist comments which lead the moderator to lock the thread. Generally, there were positive comments, but there are many gamers out there that the gaming community should be male only.

We would like to hear your thoughts on this matter, feel free and submit a comment below.