Today, a new ARK introduction was just released. More precise, 3 hours ago. The new Dino Dossier, a new beast, YUTYRANNUS has been revealed.

Being introduced as a fearless fighter, Yutyrannus Seavus will be your new nightmare in ARK. 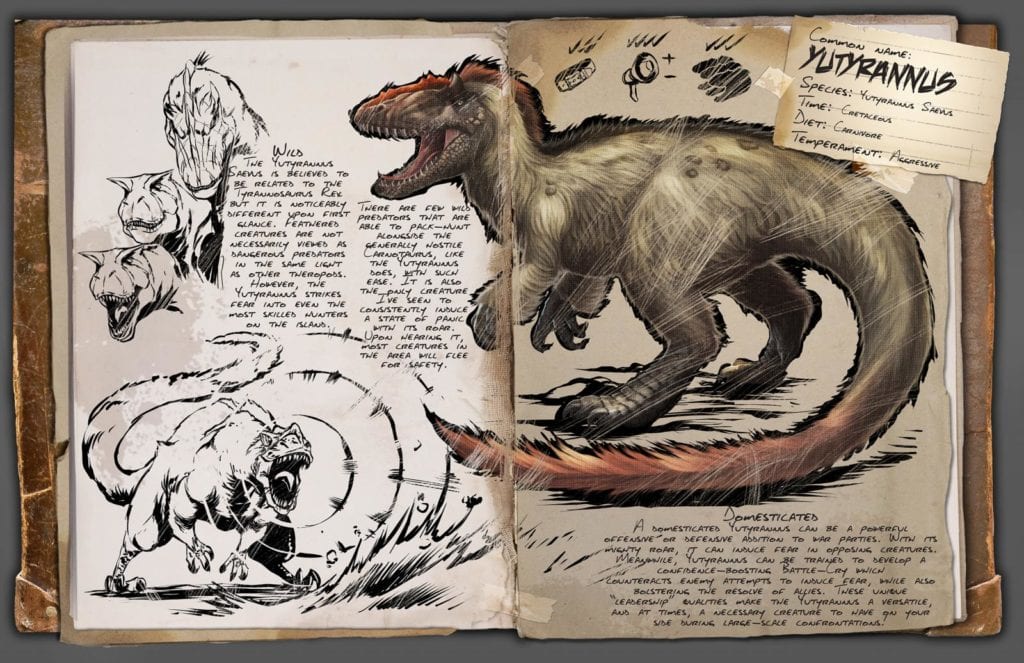 It is believed that Yutyrannus is related to the Tyrannosaurus Rex, as ARK noted, but if you see closer, it looks different. Even if you’re the most skilled hunter within ARK, you will become fearful the moment you see and hear this beast.

In the introducing article, ARK noted that Even if the Feathered creatures are not necessarily viewed as dangerous predators just the same as other theropods, the Yutyrannus will strike fear for sure.

Yutyrannus is the only creature that will create a state of panic with its roar, meaning the most creatures will flee for safety after they hear it.

A domestic Yutyrannus can be powerful defensive or offensive addition to war parties. With his strong and scary roar, he can produce fear at other creatures. Does it mean hunters will receive some kind of buffs? We do not know yet, we’ll see.

Yutyrannus can be trained to develop a confidence boosting Battle Cry which Counteracts any enemy attempts to induce fear and also bolstering the resolve of allies.

Looking sharp, scary and strong, Yutyrannus is a versatile creature that sometimes you might want to have him on your side during a large confrontations.

You cannot wait to hear its Roar and size?  Well, I guess not, because if you try to tame a creature and he comes with his roar, the creature will be running for his life for sure!

Thanks to ARK, overall, this should make the game a lot more interesting.

Having a large Predator added to the game is always nice, but we think that the T-Rex should receive the same type of Roar since it’s somehow related to it.

What are your thoughts about this new addition. Tell us in the comments down below!

From a Modder to a Millionaire: PLAYERUNKNOWN'S BATTLEGROUNDS