While in its Beta phase, Escape From Tarkov has received much love from the fans. Buying and supporting a game, while contributing towards a much larger community is what every developer need. It seems that Battlestate Games has earned everything they need in order to proceed with future updates. Therefore, Battlestate Games has announced that there will be a new EFT update. Titled as 0.4, EFT is going to receive many more items, including bug fixes.

Escape From Tarkov might be the next-gen survival game. However, it’s too early to specify where the project is heading. For now, despite the large amount of loot and items we have in EFT, there will be more to come. The Developers have announced that the upcoming patch will include over 70 new items like weapons, headwear and armor, etc…

What I am surprised is to see the new Rail mounts which are going to support modding the handguards of the LVOA blocks. That’s what makes Escape From Tarkov a beautiful game. Players can use their personal taste as a weapon modifier. However, as Battlestate Games stated, there will be a new account wipe after the update comes to live.

I will try to underline some of the most important changes, at least for me. Regarding the gameplay, I honestly love the idea for improved AI’s. The patch before improved the AI quite nice, meaning they can 360 and perform a headshot, but now, they will be improved even more. After the update, bots will be able to run away from a grenade if they see it incoming, including a reaction to a bullet if passed close to them. The very beast change regarding AIs is that they will throw grenades at players. Knew it or not, they should’ve been able to throw grenades at enemies. It was an actual bug that prevented them from doing so.

By knowing the main reason for memory leak appearance, that issue will be long gone now. Escape From Tarkov is growing, especially after some of the big name streamers started streaming the game. Spoiler: There will be no hideout feature in this update. Below you may find the full patch notes of EFT 0.4:

Added over 70 new items, including:

Will be added within 24 hours after the update:

Other changes and additions:

Other medicines: Applied to the most damaged part of the body, with a negative effect that is eliminated by this medicine 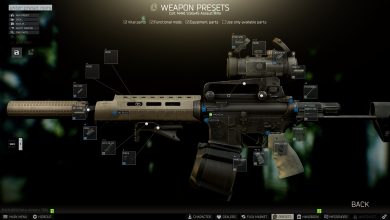