Genshin Impact is an upcoming free-to-play, open-world action role-playing video game developed by miHoYo. It is the second game from miHoYo to feature original IP, the first being Gun GirlZ. It will have players choose from a variety of different characters to complete quests and objectives. The game will also feature Co-op, making it great to play with a friend since you can explore a diverse world together! You will explore Teyvat, a mythical world ruled by the seven elemental lords, known as the Archons.

miHoYo has announced Genshin Impact’s official release date today. It will be free to play September 28 on PS4, along with PC and mobile versions. PS4 players will also receive exclusive content, including a great sword to start your journey with, and gliders to roam around the map quickly. 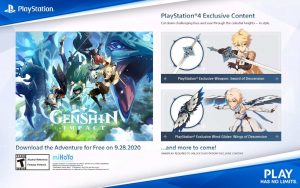 We will continue to listen to player feedback and further improve the PS4 version, constantly optimizing and stabilizing the game to upgrade its technical performance and bring players a better single- and multi-player experience.

More features are in the development pipeline. A soon-to-come version will greatly enhance the rendering of characters, and the scenery will also be improved.