Now that the reveal event is over, we had just enough time to review all the chit-chat between the producers and the host. As from the beginning, it’s nice to notice that Battlefield 5 is heading the right way. There have been many questions that received different answers, and some of the most important for most of the gamers are the pay to win and microtransactions issues.

Well, as the producers stated, this will no longer be an issue, since the rewards will be judged upon player’s progress. Only said, the more you play, the more chances you get for getting in-game rewards such as cosmetics, weapon upgrades, etc. There will be no subscription only maps, and yes, it is finally confirmed that it will be set in World War 2.

Despite the fact we haven’t heard anything about a Battle Royale mode, the Grand Operations is categorized to hold numerous of new game modes, so the possibility of adding a BR mode into Battlefield 5 is still quite reliable. Last but not least, there will be cosmetics. Presumably, received in exchange for playing the game and by spending real money or in-game currency. However, do not get this as a firm statement, because it may drown in waters since the producers jumped that whole part and did not mention anything about it.

EA’s Battlefield 5 is coming to PS4, Xbox One and PC on October 19, while pre-ordering the Deluxe Edition of the game could be experienced three days before, October 16. However, the first trial will become available on 11 October through EA and Origin Access.

Here is a short overview of the game, thanks to EA:

“Enter mankind’s greatest conflict with Battlefield V as the series goes back to its roots with a never-before-seen portrayal of World War 2. Assemble your Company of customized soldiers, weapons, and vehicles – then take them on an epic journey through the Tides of War. Experience the most intense, immersive Battlefield yet. You will never be the same.”

Battlefield 5 is set during WW2, there will be no premium passes, meaning EA has learned the lesson and the major-post release content will be for free.

What is confirmed so far:

View the reveal trailer below:

Hello, fellow readers! If you want to get in touch with us and participate in our discussion boards, make sure you visit our Forums. We are more than sure you will find something useful there, as most of the news are coming in there first. The forum is new, so be among the first ones to say Hello!
Tags
Battlefield 5 ea 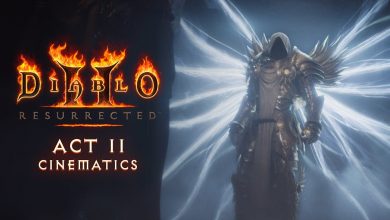 Diablo 2: Resurrected Act 2 Cinematic Shows The Journey of Marius and The Dark Wanderer