Overwatch Season 6 has finally arrived, and it brings a lot of changes and balancement on some heroes with it. Some of those changes are already made, some other may come at a half season, but we can already test them on the PTR. Here it is what is going to change in this season:

War never changes, but some heroes do.

The newcomer Doomfist has already got a nerf on the hitscan of his Rocket Punch since it was too easy to land a hit and thus one shot most of the heroes without the need of being too accurate.

Junkrat on the opposite got a huge boost, his custom mines got more cooldown, from 8 sec to 10, but now he can carry two of them, allowing him to almost double jump everywhere on the map or kill bigger threats faster. His Riptire also got a boost in speed, since it was too easy to destroy and can now climb on walls without limits. Widowmaker got his Grappling Hook cooldown reduced, from 12 to 8 second, a huge boost regarding positioning and escape. Also, her Venomous mines can see people through walls for 5 seconds if triggered.

Another huge change we got in this season is the D.va’s one. Her Matrix time has decreased a lot, from 4 seconds to 2 seconds. It was too easy for her to nullify almost every Ulti in the game, making her a must have in any team. But to compensate this nerf, she got the new ability to shoot rocket missiles in a straight line by pressing E with 8 seconds of cooldown. But that’s not enough for D.va since she can now shoot with her primary weapons and use missiles WHILE dashing, making her more offensive than defensive. Orisa gained a significant boost too; her shield size has increased by 20% and got a slightly different form, to have more cover above the shield. Also, her shoot fire rate grew by 20 %.

D.va and Orisa are not the only tanks who got a change. Also, Reinhardt and Roadhog got their modifications. Reinhardt while holding the shield can now hold the Swing button to rotate the camera around and watch on the sides/back while still keeping the shield, to have more awareness of what’s happening in the fight. Roadhog instead got a HUGE boost on his Take a Breather. He can now move while using it and he even got a 50% damage reduction while using it!

This change has been made to let Roadhog peek more in the search for a hooking target without the risk of sure death, and also he can now use his body as a meat shield for a short time while using the skill. Those were the changes for this season in term of heroes, but there is one more hero that got more than a few changes;

Mercy: The Angel of… Death? 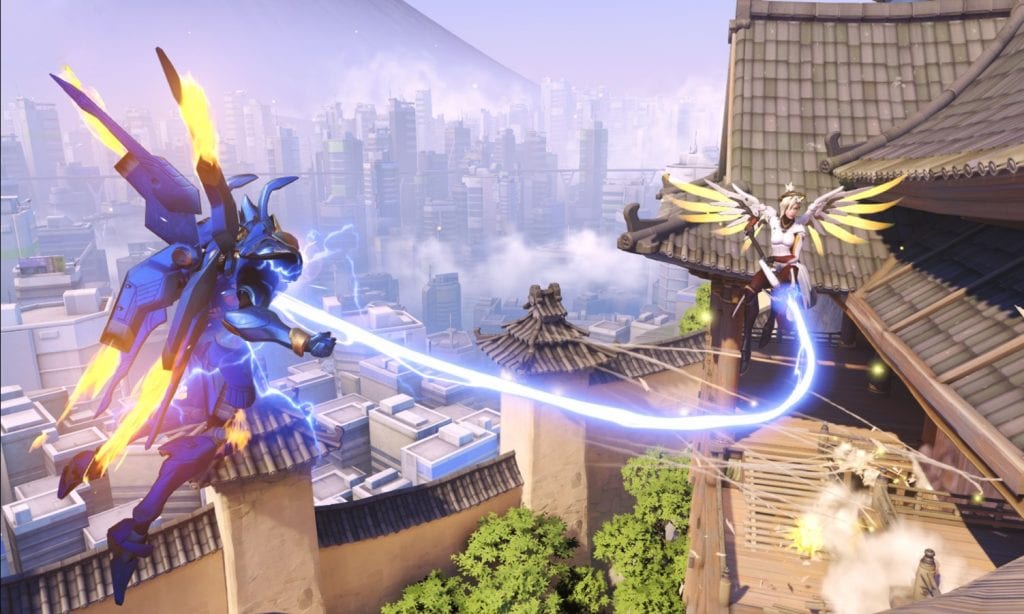 Mercy got a massive rework on her playstyle. She can’t mass ress anymore. Her Resurrection ability has been moved to the E button with a 30 Sec cooldown. So no more wasted team kills for a hiding Mercy just waiting to ress them all. But it’s not over yet; Since her mass ress isn’t her ulti anymore, she got that reworked too. While using the Q, Mercy can fly anywhere she wants, her healing beam can spread to nearby allies, her Ress cooldown is refreshed and switched to 10 sec for the duration of the ulti and she can even shoot unlimited ammo from her side weapon, more like an Angel of Death in my opinion. I saw with my eyes people in PTR doing massive team kills just flying around shooting with that tiny pistols.

Her ulti lasts 20 seconds, so it means that she can Use three ress if well managed: 1 before using the ulti, two after using it (it will refresh all cooldowns) and another one after 10 seconds. But when you think that’s all for a rework, well, you’re wrong. She even got a faster Guardian Angel dash and can regenerate health more quickly, even when hit by the enemies. What to say? I’m sure she will get a nerf on her ulti after leaving the PTR because I think it will be too overpowered in a fight, either offensively and defensively.

Now let’s see what else is going to change during this season other than the heroes changes. The season length has changed from 90 days to 60 days, so it means it will be from August 31 to October 30. A shorter season means less competitive points at the end of season thou. The “decay rate” (You have to play at least seven matches per week otherwise you’ll start losing points each day of inactivity) pass from 50 per day to 25, and you only have to play five games instead of 7 each week. Bronze, Silver and Gold players can now lose their rank if they go below the threshold of their rank if they can’t go back above the threshold within five games.

The last change is the King of the Kill mode, switching to the best of 5 to best of 3, so it means you have to win 2 round to reach the Victory. That’s all for this season changes, not all the changes are already effective right now, as the developers said, but will come out soon. Let’s go back to enjoy some Overwatch Competitive now, see you on the Payload fellows!

Steep Challenge Against The Developers