Every Fortnite Player have been expecting the Comet to strike any time, given that April 18 was supposed to be the last day of Tilted Towers’ existence. Most of the Fortnite fans believed that according to the recent theory circling the whole community, a comet would strike the most popular and iconic place on the map, Tilted Towers. Well, it did not happen, and most likely nor it will.

Many players not only that believed the story would hold waters and they will experience somewhat a new content thanks to the comet impact. However, despite all the analysis done, the joystick vibration translating into morse code, and then further converting it into a distinct sequence of words and numbers, it has proven to be wrong by nothing else but living throughout April 18.

Today is April 19, and we’ve jumped into Fortnite to see if it happened. Well, the most iconic place on the whole Fortnite map, Tilted Towers is still there. The Comet, as you can see, is at its usual spot. So, all the space-themed cosmetics and telescopes on the map are there for no reason? Well, apparently it seems so since the comet is still there and Tilted Towers is the same place as yesterday.

Epic Games on the other side remain silent regarding this situation, and they’d rather have something else to focus on than impacting a comet onto Tilted Towers. This kind of scenario it honestly might happen in the future. However, according to the evidence and multiple analysis, the comet should’ve already struck Tilted Towers yesterday, on April 18.

Serious Sam 4: Planet Badass to make an appearance at this year's E3 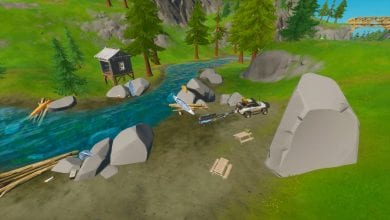