Returnal is an upcoming third-person shooter science fiction psychological horror video game developed by Housemarque and published by Sony Interactive Entertainment, set to be released for the PlayStation 5 somewhere in 2021. According to the developers, this roguelike was designed for extreme replayability and definitely something for roguelike fans.

The game’s about an astronaut named Selena who crashed on a mysterious planet with shape-shifting monsters. Selena will have to scrape through the ruins of an ancient civilization to reach Earth, battling against aliens and other types of calamities. Time and time again, she’ll be defeated, and players will have to find other ways to survive. Today, we got a screenshot of the game in which Selena’s suit literally defines next-gen graphics. 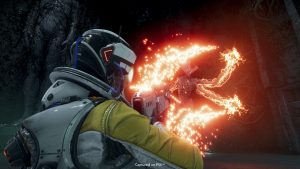 Returnal was announced back in June, but we haven’t gotten too much information about it. Today, Housemarque and Sony released a few screenshots, including this one, along with screenshots of the different types of monsters you’ll face.

Based on this gameplay trailer from June, the combat of the game looks promising, and maybe even addictive, while the monsters and the world are breathtaking. It looks like the developers have nailed on the game’s narrative and setting, making you feel trapped with only your own sanity by your side.

Hello, fellow readers! If you want to get in touch with us and participate in our discussion boards, make sure you visit our Forums. We are more than sure you will find something useful there, as most of the news are coming in there first. The forum is new, so be among the first ones to say Hello!
Tags
Housemarque Returnal Roguelike Sony Interactive Entertainment