Heroes of the Storm, a game that’s forgotten by most of the gamers. A game that offers gameplay with a lot of different characters from various game series like Diablo, WoW, StarCraft, Overwatch and Blizzard Classic. Today we’ll speak about Thrall’s Talent Build because I can see him as one of the best carries in the game. The son of Durotan comes from WoW and can really dominate in Heroes of the Storm.

Within a moment of a blink, he can put enemies down. Why do I think of this? Because he has everything you need to become a strong carry. He is Tanky, Got a high DPS, nice spells to perform a solo kill on whoever you want and he’s Passive Frostwolf Resilience is just so good which makes casting abilities on enemies heal you. Being a Melee Assassin in Heroes of the Storm, you will definitely enjoy playing with Thrall.

Ok, let’s just see Thrall’s spells before we continue with the talents:

Damage, push and stuns enemies for 1 second while dealing 290 damage and shoving them aside.

It slows enemies in an area for 3 pulses. Each pulse lasts 2 seconds and slows all enemies for 70%. Massive earthquake that can be used as a nice CC ability. However, we will avoid it.

Ok, let’s preview the talents we use and talents that help us win almost every single game. I mean, playing Thrall is a passion and everyone should enjoy playing it!

We decide to go for this because increasing Thrall’s Chain Lightning range can sometimes grant you an easy kill.

It improves the Range of Rolling Thunder by 30% and also if you attack the affected enemy you will get mana in return.

In this way it will be a lot easier for you to stay on the lane and just spam spells. 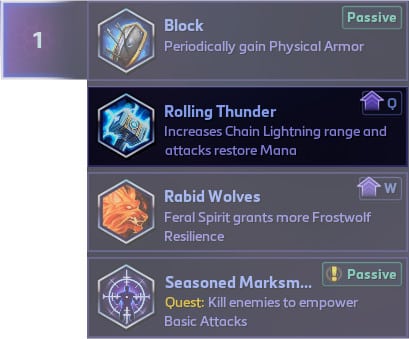 I mean, you can take the Spirit Journey or the Ride of Lightning but I prefer to go for the Mana Tide.

This is totally up to you. Getting that 15 mana might just suit us well with the Rolling Thunder talent above. 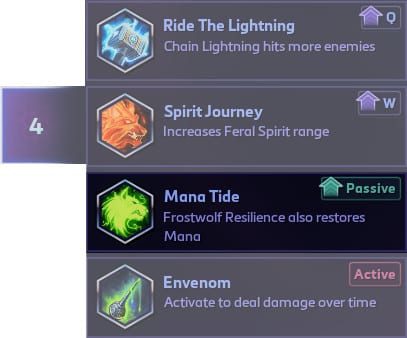 Follow Through boosts our damage by 40% for 6 seconds after we use one of Thrall’s basic Abilities.

This pretty much means you will receive damage boost most of the time while participating fights.

It should also allow you to kill enemies a lot faster. I mean, there are not much that can 1v1 Thrall later in the game.

Follow Through Is one of the Talents you must get on Thrall because his cooldowns are not that big. 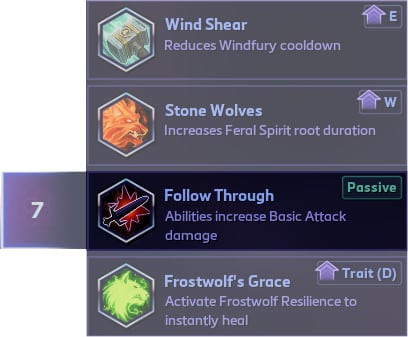 I will never go for Earthquake talent because Sundering allows us to stuck an enemy opponent and take an easy kill on him.

This could be really useful in team fights too. Getting rid of someone you don’t like or splitting them up can be a really good thing.

You will get used to it and find out what we’re talking about over here after you spend some time playing Thrall.

I was really thinking on this one and I went for the Giant Killer.

Grace of Air is also a good choice but not if there are Tanky Heroes in the game. Giant Killer allows you to have bigger impact.

If there are not that tanky heroes in the game you can definitely go for Grace of Air.

However, I’ve chosen Giant Killer over that as it will boost our damage against Tanky heroes, and they are always there in HL. 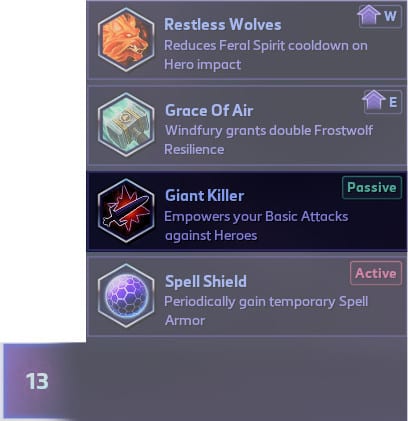 Level 16 should be your untouchable profit so you better not fail and get to that level as fast as you can.

Personally, I do not see any other Talent that will make Thrall better than Tempest Fury. His third strike will murder people.

It hits three times for 75% as normal damage. That being said, this is your way to success later in the game. 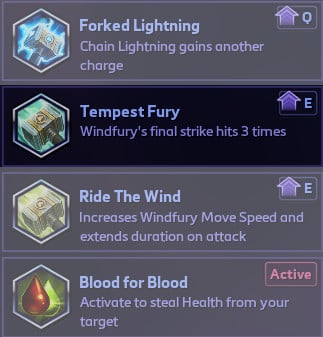 Everyone would just go for the upgrade of their Heroic or Ultimate power, but I wouldn’t.

Who would love Sundering to Travel indefinitely instead of getting the Nexus Blades? I would love to know that if someone does it.

Nexus Blades will allow you to deal 20% more damage with basic attacks and also slow enemy movement speed by 20%.

You think this is bad? Might be better to take Bolt of the Storm if the enemies have really good CC so you can get away from trouble. 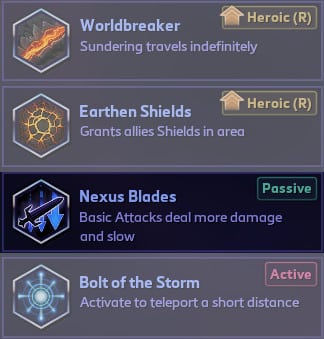 Overall, that’s all we have to say about Thrall. I love playing with him even though he’s not my main Character in Heroes of the Storm. Zul’Jin took the place and the next build will probably be his honor. See you around and do not forget to subscribe. Also, If you think going for something else might be good, please, leave your comments below and we’ll try it instantly. 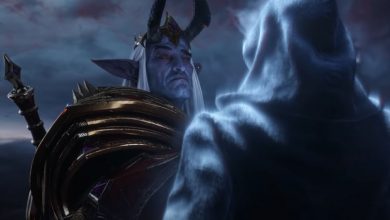