Guys, I’ve been playing For Honor a lot these days. I have also played many different classes yesterday, trying to find which class would be the best option for a next guide. Well, guess what? The Nobushi Class will have the Honor to receive this guide! Have you ever asked yourself how to play For Honor’s Nobushi Class effectively? 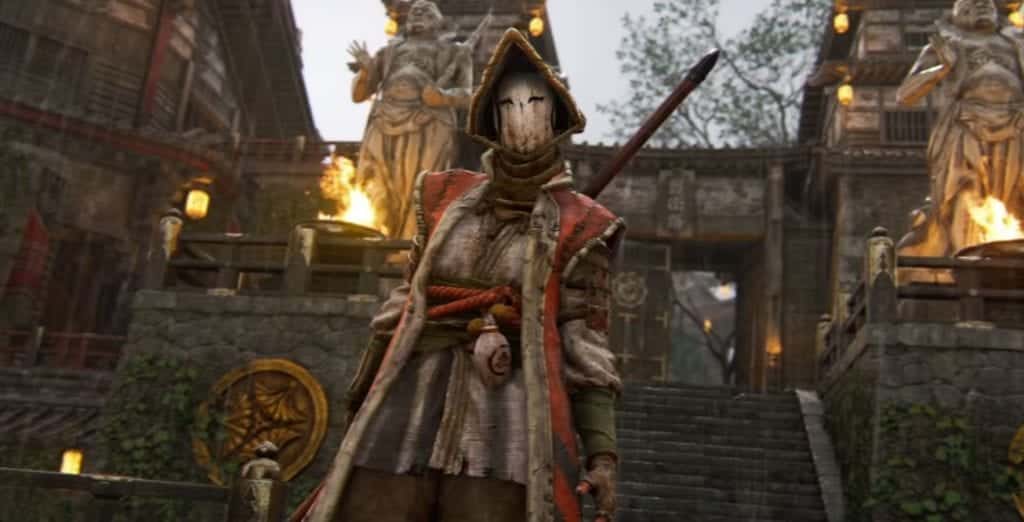 I mean… I’ve met a lot of guys just spamming the light attack while playing Nobushi and they somehow manage to win all of the games. However, that just won’t work against more experienced players. Instead, we’ve discovered some cool Combos you can do with the Nobushi pretty much against every other For Honor’s class, except the Orochi. Nobushi vs Orochi seems kind of broken as I’ve never lost a game with my Orochi, not yet in two days, but I’ve lost a game with the Nobushi while playing against the Orochi. You will see in the Video what are we talking about and how to play against them.

How To Play For Honor’s Nobushi Class both Effectively & Aggressively

I assume you already know that The Nobushi a Zone character. By meaning Zone, you probably think that you should hold Distance. I mean, yes, that might be good, but what do you think about being an aggressive Nobushi player? Oh, now your eyes seem to be fully open. Believe me, you’ll like this guide a lot! Well, yes, that’s how I prefer to play the Nobushi class against almost every other class, except the Orochi, Peacekeeper and maybe the Berserker class.

There is one insanely good combo you can perform with the Nobushi. I also think that it’s one of the best in the game, however, there are not that many different varieties while executing it. There is only one way to do it perfectly if you want to satisfy your eyes. After all, It’s all about the excitement, right? Playing the Nobushi is a real ART. You have to know the exact timing when the enemy comes towards you so you can perform a counter-attack at the right time and also initiate by doing some crazy combos.

As I said above, everyone is just using light attacks and spamming them like crazy. Yes, that might work but and you should try it since the beginning. But, what about against an experienced guy? I’ve met only 1 decent Nobushi player that knew what he was doing, however, the Orochi class is pretty much OP and he lost the match. I am pretty sure that he has won every other match he played before. Oh, one more fact, you have to work on your blocking skills a lot, because the Nobushi cannot dodge that effectively like some other classes.

Fighting against the Warden, Conqueror, Raider, Warlord, Kensei and Nobushi

Because I’ve already explained above that because of the range, the Nobushi does not need any kind of different playstyle for every single class.

You should not be scared of anything against these guys Except the Guardbreak. The Guardbreak might just kill you so whenever someone comes close to you prepare your counter Guardbreak or be ready to block the next attacks and perform a Guardbreak. The Nobushi class is pretty much bad when he’s being closed down so you better be focusing on blocking attacks because dodging is not a good option.

If you are not able to block the attacks, make sure you escape the situation ASAP or Perform a Guard Break.

So the option above tells you to keep distance. I mean, yeah, keeping distance against every single character is totally alright, but how are you going to initiate on him and be more aggressive? Well, knowing the fact that you have the longest range in the game, you might hold him off and not let him come close to you. Yes, but then what? Are you just going to block each other attacks or what?

Using The Guardbreak and how to use it properly

How to Initiate and Win the Fight

Ok guys, read this carefully because it’s going to be really important in every single fight. First of all, make sure you hold distance and harass the enemy a bit before you go in. Just to see his reactions. Try using your Cobra Strike first and see if he blocks it or not. If he doesn’t, I would prefer to go in by using the SideWinder Form towards the side of his Guard. This means you will hit him from the opposite side and confuse his block reaction. If he holds it towards the right side, dodge to the right, performing a SideWinder Form, follow it with a Kick and finish with a Cobra Strike which can be activated with the light attack.

In order to perform this, you will need to push your gamepad buttons before the event occurs. You will manage it after you practice the moves against the bots. Just make sure you do not attack them from above. The attack comes really slow and is not that much confusing, so they’ll know what’s going on

Keep in mind that whoever you’re playing against, you should be always initiating with a Heavy Attack. Otherwise, you will not be able to perform the Kick which is really important. This means if they block your Light Attack, you cannot perform the Kick move at all. But if you initiate with a Heavy Attack and they block it, you will be able to initiate the Kick. Do not know if that should work like that or it’s broken, however, it is what it is.

Classes like the Warden, Conqueror, Raider, Warlord, Kensei and Nobushi are not going to able to dodge the Kick that effectively and you will make your target bleed with your next Cobra Strike. However, be careful with the Warden when you’re performing that. You’ll see, everything is explained in the video below. That’s all you need to do against these classes. You’ll see that is working good, just make sure you follow the guide carefully.

If they block your Cobra Strike and they try to reinitiate on you fast, as soon as you see the animation make sure you dodge back and perform Viper’s Retreat. This will also make them bleed and stop their rush. Some of the above-named classes can rush you by using their movesets too. Whenever they do that, just dodge back and instead of Viper’s Retreat, try to use the normal Cobra Strike instantly, this time you do it sidewise.

Another cool move is the Hidden Stance, which is going to give you a chance to dodge an attack. If you dodge the attack successfully your next attack will start from the second hit of every Chain attack. This means that you can follow it up with a Kick after a successful dodge and apply the Cobra Strike right away.

Alright, it’s time for the Nobushi combo. Just make sure you read and use the combo below and perform it in the right order. You should be able to get any of these guys and make them go mad.

If I find out any others, I will surely update this post.

Well, I guess that’s it for the above-written classes. Let’s move towards the painful ones.

Alright, we came all the way to here. I honestly do not have that much of a good information because I am still trying to find out a way to easily eliminate them. However, All of the three classes can pretty much rush you with a Blockable attack from above. Make sure you open your eyes for that. This is some kind of a mistake from them because they are coming close to you.

There are two options to deal against that. The first one is to use Viper’s Retreat, but make sure you Dodge back before. This will be really hard. The second solution is to block the attack and apply a Guardbreak instantly, but this time, do not use the Kick moveset, because these guys have an amazing dodge speed. They will Dodge your Kick really fast and you will need to run away. Of course, I am talking about the good players out there. They will make you suffer for sure.

Attacks that will hurt you a lot

The Orochi will harass you with the Zephyr Slash. Berserker will use Spin Chop. The Peacekeeper will use SideStep Strike. So, you are pretty much in big trouble. They are such a pain for the Nobushi.

Remember that you are Nobushi and you cannot fight at close range, at least not against these guys. This is where you need to make distance and just try to poke them. Avoid their guard and make sure you use the Viper’s Retreat at the right time. Whenever they come to you just make sure to dodge back without your guard and do not let them close you down at all. Using the combos from above might bring you a win. However, that will probably happen against low-skilled players.

The Only difference between these classes is that it will be ok for you to attack them from above. Why? Because, the majority of players try to attack from the side by dodging.

You can see in the video below that they are really painful when they’re close to you. They also have a fast attack speed. Because of that, make sure you’re ready to block or Counter-Guardbreak.

I hope you’ll live the video and make sure you listen to it carefully. Are you ready to become the Master Nobushi player? Well, time will tell.

Guys, please, do not Judge, we are really trying to do our best in developing these For Honor Guides. They are also being updated all the time as we proceed in the game. If you think you need to judge instead of giving your thoughts on what should we change in these Guides… then, we honestly don’t know what to say.

Hello, fellow readers! If you want to get in touch with us and participate in our discussion boards, make sure you visit our Forums. We are more than sure you will find something useful there, as most of the news are coming in there first. The forum is new, so be among the first ones to say Hello!
Tags
For Honor guide Nobushi

How To Play For Honor’s Peacekeeper Class

How To Play For Honor’s Peacekeeper Class

How To Play For Honor's Orochi Class